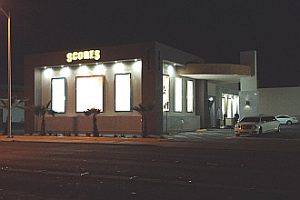 Scores is a national chain of roughly a dozen gentlemen’s clubs that started in NYC in the 1990s. Las Vegas had a Scores strip club until 2008, when the property was purchased by Rick’s Cabaret. With cheap drinks for locals and plenty of pretty dancers, Scores was one of the most popular strip clubs in Vegas at the time it was taken over by Rick’s. Locals bemoaned the change in management, as Rick’s ignited the taxi wars that put half a dozen popular Vegas strip clubs into bankruptcy.

The new Scores is located on Highland Drive, about halfway between Girl Collection and Spearmint Rhino. It’s the same building as the now-defunct Foxy’s, a hole-in-the-wall locals’ titty bar, but completely renovated. It is now a glitzy high-tech club, though much smaller than competitors like Sapphire or Deja Vu.

The club opened its doors last Friday and is selling drinks, though there were no dancers on stage when I was there early on Saturday night. They are now hiring dancers and there may have been dancers later in the evening. They won’t be having their Grand Opening party until April. There are video monitors yet to be installed, and lots of artwork and decorative features yet to be added. But they are opening each night at 8 pm and they have a full bar. No cover charge for locals, so check it out.

If you order a drink, be sure and tell the bartender or waitress you’re a local as your drinks will be half-price ($7.50 for a domestic beer, instead of $15). Again, I can’t comment on dancer quality, ambiance, or much else yet, as the club is still in the hiring process and not much was happening on my Saturday night visit.