The organizers of the “Love and Sex with Robots” conference, which was scheduled to take place next month (Nov 16-19) in Malaysia, have been informed by Malaysian police that it is illegal to have sex with robots in Malaysia and that if they plan to go ahead with the conference, they will be punished.

Apparently 15 academic papers by human/robot sex researchers from all over the world have been prepared for presentation at the conference, but unless the organizers can convince Malaysian authorities that sex with robots is just part of the natural evolution of man, the conference will likely be shit-canned.

One of the organizers of the conference, David Levy, who wrote a book in 2007 titled “Love and Sex with Robots” is quoted in MalayMailOnline as stating that he believes sex with robots could be an answer to the pedophilia problem: “For people like that, I think that sex robots will be a real boon. It will get rid of a problem they’ve got, fill a big void in their lives and make them much happier.” 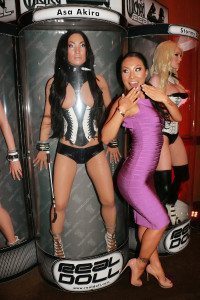 Currently, there are a number of companies creating very realistic life-size sex dolls that look like adult humans–male, female, and transgender!–complete with “functioning” genitalia.

RealDolls currently sell in the $5,000 -8,000 range, depending on the body type and features. The talking head is expected to be available within two years and is currently estimated to cost an additional $10,000. A robotic body will be developed next for the doll and is reckoned to cost $30,000-60,000.

A Japanese company is now selling life-size NaughtyDolls that reflect that culture’s passion for schoolgirls. NaughtyDolls have cute childlike faces but both body types available have developed breasts, which makes them not children,  but teenagers. NaughtyDolls sell for about $6,000.

The argument against selling sex dolls that look like children is that some people believe that such a product on the market would encourage pedophilia, not alleviate it.

And how long will it be until one of these companies starts selling chickens and sheep for men who grew up on farms and want to get back that old “first-time” feeling? I haven’t yet seen any ads for farm animals with functioning genitalia, but I’m sure it’s just a matter of time.