The newest strip club in Las Vegas was closed by Clark County officials after the arrest of rapper “Blueface” on November 15th. On October 8th Blueface opened fire on a vehicle moments after there was an altercation outside of the club at 4am in the morning.  The rapper was subsequently arrested for attempted murder. According to police accounts, the shooting was the end result of a joke falling flat and sparking a strip club fight.
According to legal filings, Blueface and his crew were at Euphoric Gentlemen’s Club 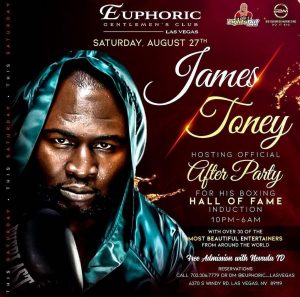 in Vegas on October 8th.  … and the victim made a joke about the rapper talking with “some females in a cheap vehicle.”

Johnathan Porter, 25, popularly known as Blueface, was arrested on November  15th outside Lo-Lo’s Chicken and Waffles, near East Flamingo Road and Koval Lane, on arrest warrants for attempted murder and discharging a firearm.

See Video of the arrest here….

Video taken of the arrest and posted by TMZ.com shows Metro  undercover officers tackling Blueface and arresting him while others off camera criticize and question officers about the arrest.

TMZ Video of Shooting and Arrest Traylor had “what appeared to be a bullet graze wound to his left hand,” the arrest report said.

According to the arrest report, Traylor had recognized Blueface, who burst onto the music scene in 2018 with his viral hit ‘Thotiana,’ and spoke with him in the club.

Gunshots were fired from the Blueface entourage toward Traylor as Traylor tried to drive away in his truck, stepping on the gas and hitting some parked vehicles as he tried to flee.

The next day, when Traylor was being interviewed by detectives, investigators took photographs of two places on the truck that had been hit by bullets. Officers also found a full bullet in the vehicle.

Traylor had a bullet graze wound to his left hand and multiple bruises on his body, police said.

Investigators also talked to Eugene “Gene” Rotondo, the owner of the club. Rotondo let officers watch surveillance video. At 4:06 a.m. Oct. 8 the video shows Traylor being beaten in front of the club.

A man in a ‘Kool Whip’ hoodie “brandishes a handgun and discharges what appears to be two rounds at the vehicle,” police said.

See video of the shooting …

Police concluded that the man they watched on surveillance video who was shooting into Traylor’s vehicle was Blueface.

“Porter is seen on surveillance video firing what appears to be a handgun into the passenger compartment striking Traylor in the left hand narrowly missing his head due to Traylor being ducked down and driving away,” the report states.

A female nearby then picks up the shell casings from the shooting.

Detectives then went online and saw posts from Blueface’s official Instagram account that showed him wearing the same clothes as had been seen in the surveillance video. But according to the arrest report, detectives were able to determine that the phone number associated with the account is registered to T-Mobile, with Johnathan Porter being the account holder.

They also saw messages from Oct. 8 and Oct. 9 where Porter indicated he was staying at the Rio on Flamingo Road just west of I-15. 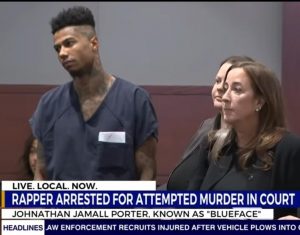 Tammy Wynette: “Stand By You Man” 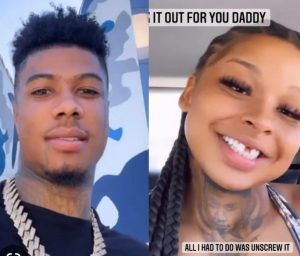 manager, Wack 100, were both present at the rapper’s court hearing on Wednesday, where they celebrated his “likely” release.

The traditions of troubled performer George Jones and Tammy Wynette live on in the wee hours here in Las Vegas.

“Professional Management, There is No Substitute”

“Lawyer threw them gloves on and we beat another case,” Wack gloated in a video posted on Instagram, referencing The Game’s line on “Ali Bomaye.” Rock added in her caption: “His family here is we got him Daddy coming home.”

Apparently Wack 100 is not aware that an arraignment or bail hearing is different than a trial here in the state of Nevada.

When all else Fails, There’s Always Mom!

The drama involving Blueface’s family continues to play out on social media. The rapper hasn’t released a project since he shared his debut studio album, Find the Beat, back in 2020. These days, he’s more recognized for his online antics with girlfriend-non-girlfriend Chrisean Rock, or their controversial physical altercations. However, his recent arrest put him back in the spotlight, and his mother is speaking on the situation.

Blueface’s mother, Karlissa, has often been at odds with her son and Rock. They’ve waged verbal war on social media. Karlissa took to Instagram to deliver a message about his attempted murder arrest. “Y’all got to be some of the slowest people on the bus, I swear to god,” she said.

Ever the naughty boy, Blueface turned his fire back on his mother… “I lost her to the internet. She just want to be known to get her hair done!” 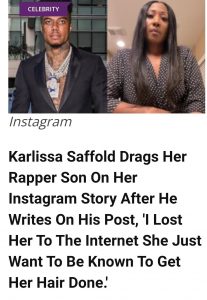 It’s our understanding that Clark County has suspended the club’s license to operate due to a failure to report the shooting to Metro. That’s a big mistake by the club. We wish them well.

ToplessVegasOnline is pleased that things are getting back to normal in Las Vegas. Once again, when rappers shoot people, they don’t bother with masks or social distancing.  When NFL stars beat the crap out of club patrons, they are oblivious to the video surveillance that is everywhere in town. When the entourages of jackass celebrities enforce a safety perimeter, they only use closed fists and track shoe covered feet.

Yes … Vegas is back baby!