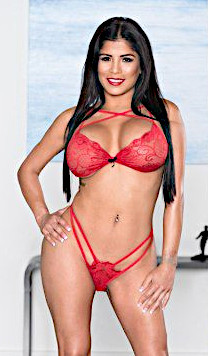 On Friday night, September 20, busty Latina Alexis Amore will be the sweet treat of the night, with her stage sets starting at 11:30 pm. Alexis has appeared in more than 200 adult flicks, including such beloved classics as the aptly-titled Big Rack Attack and Never Ending Tits.

Alexis is also an actress in low-budget mainstream flicks, most recently Streets of Vengeance and Rock’n’Roll: The Movie. And if you, like me, were a fan of the Reno 911 sitcom series and you recall the episode with Vampirella, that was Alexis playing everybody’s favorite buxom bloodsucker.

When Alexis is not on stage, she’ll be making herself available for private shows in Sapphire’s VIP rooms.  If you can resist the opportunity to get alone with the never-ending tits of Vampirella, you are a stronger man than me. 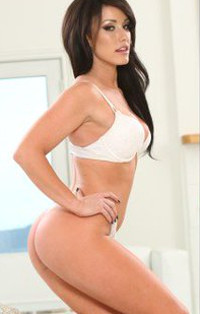 If you have hands-on fun with the world’s hottest ass and best boobs on your bucket list, you know what you have to do.

To get alone with either Alexis or Jennifer for an up close and physical private VIP show, start by reserving a seat at their private tables, where they party and flirt with their fans when they’re not on stage.  That seat is $135 and comes with a two-hour open bar that includes the good stuff (everything but champagne and super premiums) and first crack at Alexis’ or Jennifer’s undivided attention.