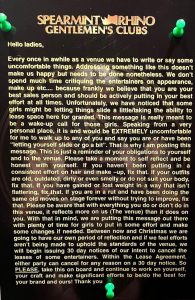 Country singer George Strait has a hit song titled, “She Let Herself Go.” The ironic title is about a wife who finally allows herself some freedom, luxury and fun after a suffocating marriage.

I don’t think the message that Spearmint Rhino is sending to their dancers is meant to be ironic, or subtle. Among other things the club’s management is pointedly telling some dancers to fix their makeup, fix their hair, watch their weight …. and even wash more frequently! Ouch.

TVO spotted this open letter posted on the wonderful dancer app, Dancers Resource. By all accounts it was written by the management of global ultra-club Spearmint Rhino. Spearmint Rhino has one of the largest and longest tenured clubs in Las Vegas, as well as locations in New York, Dallas, Pittsburgh, Florida, Minneapolis, London, Melbourne and Los Angeles.

Spearmint Rhino Has a Warning for Dancers

The letter specifically states, “Unfortunately, we have noticed that some girls might be letting things slide a little/taking the ability to lease space here for granted.”

They continue …. “This message is meant to be a wake up call for those girls.”

“If you haven’t been putting in a consistent effort on your hair and make-up-fix that. If your outfits are old, outdated, dirty or even smelly or do not suit your body, fix that.”

The note adds: “If you have gained or lost weight in a way that isn’t flattering, fix that. If you are in a rut and have been doing the same old moves on stage forever without trying to improve, fix that.”

Management reminds their independent contractors that they are a reflection on the club. The club, or the ” venue” as they say, has much at stake.

The message is giving dancers a grace period between now and Christmas to get things right. If things don’t improve …. Scrooge Rhino will be delivering lumps of coal to some girls by the tone of the Holiday Message from Management.

The posting on Dancers Resource generated hundreds of responses from dancers. About 65% of the comments were supportive of the effort to improve standards in every club, especially their own clubs. Another 35% were angry at the letter for its mean tone or hypocritical stance. They often cited Spearmint Rhino’s past lawsuits and reputation.

Honestly, I’m not a fan of Spearmint Rhino because they have tried to charge me, and other locals a $40 cover charge to visit their Las Vegas location.

When I’ve been there, the inside staff have been professional, and the

girls are always very attractive. In prior TVO columns and weekend updates I’ve always noted that the dancers at Spearmint Rhino are said to be the sexiest performers in Nevada.

The outside security has been overbearing and all too eager to act tough. I find that tiresome and easy to avoid.

I’d like to know what TVO readers think of Spearmint Rhino in Las Vegas, and elsewhere.

What Do You Think of Spearmint Rhino?