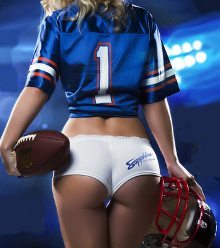 The best Super Bowl Sunday viewing parties are always in the Vegas strip clubs. Prices announced are always pre-event pricing for online or phone reservations. Prices may be higher on game day. Virtually all of the parties include raffles and prizes so I don’t mention those in my descriptions.

Treasures has a major big game party planned that lasts from 1:30 to 8:30 pm with three package deals. The $100 package includes limo transport, an open bar for well drinks and a lavish buffet. The $125 package is the same but with a premium open bar. The $188 package has a premium open bar plus a New York steak dinner. The open bar runs from 1:30 till the end of the game. Since the game doesn’t start until 3:30, and the average Super Bowl doesn’t end until more than three hours later, this means you can get a premium open bar for about 6 hours for $125! This party will sell out, so make your reservations in advance. Treasures has its own steakhouse with a real chef, so their buffet itself should be over-the-top. Call Treasures at 702-257-3030 to reserve your ride and a seat for the game. Topless, full bar, 21+

Sapphire has multiple Super Bowl packages available. The main ones are the $75 package that has seating in the main room, and the $150 package with seating in the Showroom. Both packages include transportation, entry, the club’s great buffet and dollar dances at halftime. For information on group, couple and bottle packages, call 702-869-0003 or check out all their deals online at Sapphire’s Super Bowl packages. Topless, full bar, 21+

Palomino Club has the only Super Bowl viewing party featuring nude dancers, and provided you don’t arrive via taxi/Uber/etc., admission is free! (It’s $30 if you come by cab). They’ll also have free food, $5 drafts, a $5 shot table, $25 pitchers, $125 bottles, $30 domestic buckets, $35 import buckets, and an all nude halftime show. Call 702-642-2984 to reserve a seat. Check out Palomino’s package deals for both groups and solo guys. Nude, full bar, 21+

Hustler Club has three different Super Bowl packages. The $25 package is for locals and includes transport, entry, open bar until kickoff and free buffet. The $50 package is the same but for out-of-staters. The $100 package adds a bottle of Hustler Vodka. Topless, full bar, 21+

Crazy Horse III has a $179 VIP package with a premium open bar throughout game and an unlimited buffet. The $59 General Admission package includes one plate of food. Both include transportation, and entry fee. Topless, full bar, 21+

Spearmint Rhino has a $150 Premium Bottle Package that includes a one liter bottle, plus mixers, buffet, entry, transport, etc. (Note: Rhino’s website says $100, but on the phone I was told it’s $150 after taxes.) Topless, full bar, 21+

Cheetahs will have free pizza and wings, $100 bottles, and beer bucker specials throughout the game. Topless, full bar, 21+

Minks (formerly Babes) will open at 2 pm on Super Bowl Sunday with $25 Bud Light buckets and free shots for all after every first-half touchdown. No cover. Topless, full bar, 21+

Sophia’s is advertising a Super Bowl party with a tailgate buffet, but no other details. Topless, full bar, 21+

2 Responses to “Super Bowl Parties in the Vegas Strip Clubs”