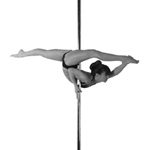 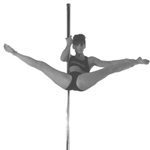 The Debate Over Pole Dancing 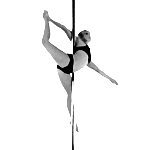 There’s a big debate about whether or not pole dancing should be in the Olympics, and of course it should. Pole dancing is simply vertical gymnastics.   Pole dancing requires the same strength, flexibility, grace, endurance, precision, and balance as gymnastics on a mat or a balance beam or parallel bars. 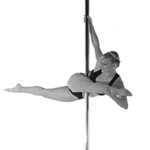 The top performers in the field are magnificent athletes.  Why shouldn’t they be recognized for their skill and why shouldn’t everyone who appreciates athletics enjoy it?

Detractors complain that pole dancing is too sexy.  Compared to what? Have you ever watched the other Olympic women’s gymnastics events? I don’t think I’ve ever met a guy who would turn the channel on that show.

And would it shock women to know that guys are erotically aroused not only by Olympic gymnasts, but also figure skaters? When I was a kid of 10, 11, 12, I loved going to the Ice Capades just to watch the female skaters bend over in those sassy little skirts with their panties riding up their butts.

It’s simply a fact of nature that when men see women who can spread their legs in full-split positions in eighteen different ways, and they’re doing this in skimpy little outfits that would normally be considered underwear, we can’t help but think, “Geez, can you imagine having a girl like that in bed?” 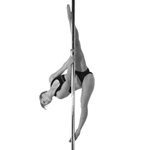 But you don’t have to wait for pole dancing to make it into the Olympics to enjoy this beautiful art form.  Las Vegas has gone pole crazy.  Pole dancing can be found in casino shows, bars, nightclubs, tour buses, and even in hotel rooms all over Las Vegas right now.

Sexxy, the new topless revue in the intimate Shimmer Showroom at the Westgate, is dominated by the dancing of Jennifer Romas, who created, produced, and choreographed the show, and also stars as the lead dancer.

I’ve been complaining for years about the pole dancing in Vegas production shows.  One problem has always been that the cheapskate casino showrooms don’t invest in professional stripper-quality poles, which must be secured at both the top and bottom, and which must spin.

What we usually get in the casino shows is a second-rate pole that’s stuck into a hole in the stage and wobbles horribly from the weight of the dancer, affecting her balance, timing, and precision. I’ve been telling people for years that if they wanted to see real pole dancing in Las Vegas, they had to go to the Vegas strip clubs (see below). 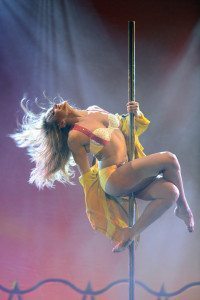 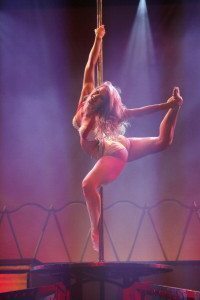 Pin Up at the Stratosphere probably has the other best pole dancer in a current casino showroom production. Pin Up is not a topless show, but it’s still one of the sexiest casino shows in town.

The pole dancer, Koree Kurkowski (see pics above), is limited by the fact that the pole is not fastened to the ceiling (as professional stripper poles in strip clubs are), but her pole work is breathtaking. Kurkowski’s act is mostly a striptease performed as a series of long-held sexy poses, a kind of pole ballet (she even wears toe shoes).

X Burlesque, a topless show at the

Flamingo, has a pole on a mini-stage out in the audience where many of their showgirls take a turn. Here’s one of the X girls swinging over the crowd (pic at right). X Burlesque is one of my favorite topless shows in town because the dancing is so high-energy and the dancers seem to be having fun.

Jubilee, the long-running showgirl extravaganza at Bally’s, has a professional-style pole that’s fastened at both the floor and ceiling, and it’s probably the highest pole in Vegas—50 or 60 feet tall. The show opens with a spotlight on a dancer at the very top of the pole, and when I saw her up there, I couldn’t wait to see what she would do with all that pole. 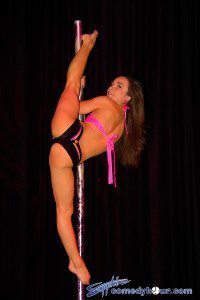 But after she made her way slowly down the pole to the stage–just sort of slowly sliding down–she left the stage, they ditched the pole, and we never saw it or the dancer again. Bummer!

There’s usually an awesome pole dancer performing at the Sapphire Comedy Hour (show review) on Friday and Saturday nights (Sapphire web site). She comes out between the comedians.  This show is not out in the Sapphire main room where the strippers perform, but in Sapphire’s more intimate 300-seat showroom. Here’s one of the Sapphire pole dancers (at left; click to enlarge the pic). For my money, the pole dancer is the best part of the comedy show, followed by the burlesque dancer. 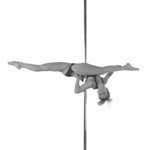 Having said everything I just said, in my opinion there’s only one place to watch really high-end pole dancing, and that’s in a strip club. Pole dancing was invented by strippers, and it’s meant to be sexy.

Even if you’re a woman who would like to watch pole dancing in Vegas, I recommend you consider a strip club.  It so happens that Las Vegas’ best strip clubs for watching great pole dancing are also female and couples friendly.

There’s no “clean” version of pole dancing being done anywhere today, even in the competitions that try so hard to disassociate themselves from strip clubs. 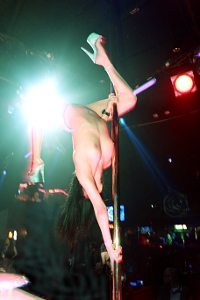 Palomino Club is couples and female-friendly–in fact, on a busy weekend night roughly 5-10% of the audience at Palomino Club will be women, and they come to party. 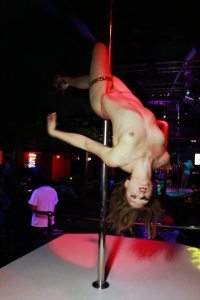 And sometimes the dancers are playful and childlike.

Palomino Club has quite a few pole artists who could compete against the best anywhere. See also: “The Pole Dancers of Palomino Club”

If a nude club seems a little too far out for you, I recommend checking out the pole dancing at one of the Vegas topless clubs.  Though most of the topless clubs put less emphasis on their stage shows, I recommend Sapphire (club review /club website)  in particular as a club that features accomplished and exciting pole dancing, and is a club that welcomes women and couples.

If you’re a woman who’d like to watch great pole-dancing and you’ve never been to a strip club before, check out my wife’s account of her first visit to a strip club with me to see if you’d enjoy it: I Took My Wife to a Vegas Strip Club (and Lived to Tell About It).

(You can find an encyclopedia of more than 300 pole dance moves, each one illustrated with a video, at the Pole Dance Dictionary website (which is where I stole the little black and white pics from.)