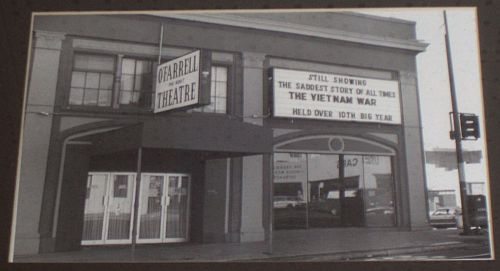 Lap dancing was invented in the mid-70s at the Mitchell Brothers’ O’Farrell Theater in San Francisco, and I was there the week it happened.

To further keep their expenses down, instead of paying the dancers, they encouraged customers to start tipping the dancers on stage—the first time I’d ever seen that in a burlesque show since I started going to the shows in Detroit back in 1963. At some point the dancers realized they could make more tip money if they went out into the audience to collect tips from the guys who weren’t sitting right around the stage.

I was a regular at the O’Farrell Theater.  I went there about once a week, going before noon because it was only $5 before noon and because you could always get a seat up front if you got there before the financial district lunch crowd.

I remember the first time I saw the dancers coming off the stage and going down the rows of theater seats, sitting down in each guy’s lap, one after another.  Nobody had ever seen anything like that in a burlesque show before.  The guys in the audience were looking at each other, wondering if anyone else understood what was happening.

Many of the dancers were naked, as they didn’t come down into the audience until they’d finished their stage sets. And they didn’t just sit in our laps.  They encouraged us to touch them, feel them up, and some of them would even make out with you.

I remember one dancer I started necking with who put her hand on my crotch and said, “Is it okay if I take it out?” I said no, but I felt bad about it.  I remember thinking she was much more evolved as a human being than I was.

One dancer whispered in my ear, “Feel how wet I am.”

Most guys tipped $1, but the tip wasn’t required. If a guy didn’t tip, the dancer just moved on down to the next waiting lap. If a guy tipped more than a dollar, the dancer might stay longer.

More than one dancer told me, “Keep your bread—I’ll get it from the straight guys”—the “straight guys” being the guys in suits and ties from the financial district.  But she stayed in my lap just the same.

This was pre-AIDS and pre-herpes, and many young women, especially in San Francisco’s hip subculture, considered aggressive promiscuity to be a form of revolutionary feminism.

The Transition of Lap Dancing to an Art Form

I remember when the dancers were told by management in the late 70s that they had to put their g-strings back on before they came down into the audience.  Jim and Artie were constantly getting busted on obscenity charges and I expect the g-string rule resulted from one of their busts.

I also remember the first time a dancer told me they weren’t supposed to kiss on the mouth anymore. I asked her why. She said it was just another new policy, and we went back to making out.

To me, this was feminism at its finest.

Within a few years, the dancers came to realize how much money they could make just sitting in guys’ laps, and when AIDS and herpes hit the news in the 80s, the lap dancing became less directly sexual and much more of an art form.

The stage shows at that time got really wild. That’s when Hunter S. Thompson got a job as the night manager at the O’Farrell Theater. He allegedly wrote a book about it that was never published. He’s quoted in Wikipedia as having called the O’Farrell Theater “the Carnegie Hall of sex in America.”

By this point in the mid-eighties, the O’Farrell dancers had developed all of the common lap-dancing moves and positions we see today.

In any case, the next time someone tells you the hippies contributed nothing of lasting value to American culture, tell them they invented lap dancing. It was invented by  courageous young women who were rethinking the social norms. Hippie chicks. God bless ’em.

For a reminiscence of the transition from gloves-and-gown striptease to dirty dancing in the early 1960s, see When Burlesque Met Rock ‘n Roll.

3 Responses to “The Birth of Lap Dancing”