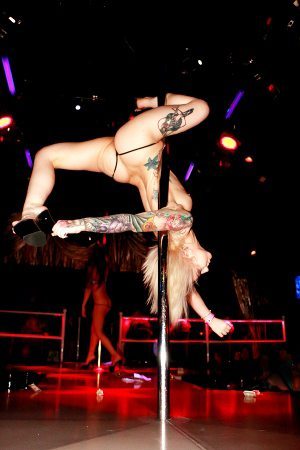 Kaymarie Getting Warmed Up
at Palomino Club

The NotaStripper pole dance community considers dancing in strip clubs a “stigma” to overcome. This is described in The Telegraph (UK) by Sian Elvin in her post; “I’m a Pole Dancer, not a Stripper. Let’s End the Stigma.”

But there’s a reason why pole dancing is associated with strippers. Pole dancing was invented by strippers. Some of the pole dancing blogs (See International Pole Dance Fitness Association) claim that pole dancing has evolved from ancient forms of dance and athletics that date back to Chinese and Indian ceremonies where men climbed poles or used them to display athletic prowess. But that’s bullshit. They’re really stretching to find roots outside of exotic dance. The strip club dancers who invented pole dancing never saw or even heard of these ancient pole athletes, and modern pole dancing has nothing in common with them.

Many of the biggest clubs had numerous small stages–just five or six feet in diameter, like a table–with a pole running up the center for the dancers to hold onto when kicking or doing any type of move that might cause them to lose balance and possibly injure someone in the audience. The poles were installed simply because these mini-stages were too small to allow much in the way of dance.

For more on pole dancing, see:

The Pole Dancers of Palomino Club

One Response to “The History of Pole Dancing”