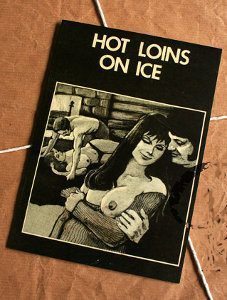 One of My Better-Selling Titles

In the men’s market, the top payers were Playboy and Esquire, but I’d already gotten so many rejection slips from them, I figured they were a lost cause and not worth the postage. A few steps down on the pay scale was Cavalier, then, in no particular order, mags like Escapade, Man-to-Man, Adam, Mr., Gent, Sir, and a bunch of others. Penthouse and Hustler didn’t exist yet. It was hack, formulaic writing, but I would write anything that paid back then, anything that would enable me to support my kids without actually getting a job.

I was married with two kids, living in San Diego and working the graveyard shift as a postal clerk when I first started writing for the pulp markets. Shortly after the checks from publishers started rolling in, I quit the p.o. job and we moved our family back up to Berkeley. That turned out to be a good move because I also found freelance work writing for U.C. students—book reports, term papers, whatever. There was a storefront operation on Bancroft, right across from the campus, that hawked papers for UC students. I’d get assignments from them.

Another operation in the same neighborhood pedaled class notes. I’d attend classes they assigned, take notes on what was covered, type ’em up, and they’d sell the notes to students who were skipping out on their classes. It always struck me as crazy that there were students who paid money to attend college, then skipped out on their classes, but paid me to go to their classes and write their papers. Of course, they’d get a diploma while all I got was a weird variety-pack education and a few bucks. 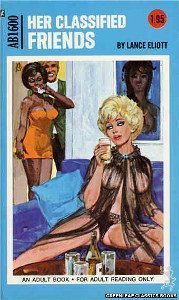 It was strangely educational writing for the men’s and women’s pulp markets simultaneously. The contrasts were glaring. The publishers would send writers their formula sheets that described the types of stories they wanted and it was pretty funny to compare the typical blue-collar male sex fantasies to the typical blue-collar female love fantasies. Throughout this period, my wife and I had a running dialogue about the male/female disconnect.

This criterion puts a lot of constraints on the writer. You can’t waste much verbiage on irrelevant things like character development, storyline, plot—you’re pretty much writing one sex scene after another for a readership with no interest in foreplay.

It was easy to write any of the hack crap once you got the formulas down, though the men’s stuff was definitely easier for me. I wrote one novel by plagiarizing another book, just rearranging the chapters and changing the characters’ names. It ended up taking me longer to do that than just churn it out of my own head.

I tried to have fun. I was always trying to inject humor into the stories. I wrote one book where a female trapeze artist in a circus had a steamy love affair with a monkey. But I also got letters from my agent complaining about my jokes. One manuscript was returned to me because after the editor had blue-lined all the “funny stuff” for deletion, the word count was only half the required length.

I didn’t even think about putting jokes into these stories. The female protagonist was just a regular girl living in a typical nothing-special neighborhood. She’d made some mistakes in life, but she was basically innocent, a good-hearted person, pretty naïve. She really just wanted love and happiness, but there were terrible obstacles to overcome, often because of those innocent mistakes she’d made.  But she would fight her way through it. Her ideal guy would be the strong, silent type, loyal and true, a family guy who could take care of her.

One glaring difference between the porn novels and the confessions was that it seemed that the women who read the confession mags believed the stories to be true. Letters to the Editors in these mags often contained advice (or condolences, or congratulations, or scolding, or whatever) from readers who seemed to think the story tellers were actual women confessing things that had really happened to them. It occurred to me that the Letters to the Editor might also be written by hack writers on staff. But still, I never tried to inject humor into these stories. They were obviously supposed to be real and heartfelt.

When my manuscripts were published, Greenleaf (or my agent) would always send me a couple copies of each book. They always changed the titles I’d provided for the novels and they spelled my pseudonym–Lance Elliott–different ways (depending on their mood, I guess). Not that I gave a shit. But I was always disappointed when I skimmed through the books. Every joke was gone and new dirty lines were added willy-nilly (with no sensitivity to style or rhythm) just to pump up the flip strength. My books looked just like all the rest of them.

I used to imagine a guy reading one of these degs while his wife was reading a romance mag, and I’d wonder how they ever communicated with each other, how they ever got together in the first place.

By immersing myself so deeply into the bottom end of the male and female middle-American fantasy worlds, I started seeing variations on the stock formulas everywhere—mainstream Hollywood movies, TV dramas, other novels. It got so I was categorizing films as “boy movies” or “girl movies” within minutes of the opening scenes. Subtle variations of these formulas are common in westerns, sci-fi films, romantic comedies, war movies, shoot’em-ups, spy thrillers.

Some of the most successful films manage to satisfy both the male and female fantasies simultaneously. I first noticed this in the 1971 Jane Fonda film, Klute, where Donald Sutherland was the strong, emotionally reserved savior (a cop) and Fonda plays a prostitute (slut) who is also presented as naïve and innocent. A similar film some twenty years later was Pretty Woman (1990), where Julia Roberts was the innocent slut and Richard Gere was the strong, emotionally detached savior (millionaire).

And Paul Bowles’ 1949 novel, The Sheltering Sky is a high-end literary version of the deg, as is the 1990 film based on the novel.

Both men and women find these fantasies compelling.

Writing for the confession mags and Greenleaf Classics was a drag, but I felt it was better than working a job.  Even when writing stuff I disdained, I could do it at home in my living room with a cup of coffee and a cigarette, on my own time schedule. I produced nothing I was proud of, nothing I’d want to show to my friends, other than as a joke: Can you believe I’m getting paid to write this stuff?

They had published an illustrated edition of the Presidential Commission Report on Obscenity and Pornography. The commission had been appointed by Nixon to study the social consequences of pornography on society. They came to the conclusion that pornography appeared to have positive social consequences. In places where pornography was more widely available, there were fewer reported rapes, less child molestation, fewer out-of-wedlock teen pregnancies, a lower rate of divorce…

The commission recommended that the U.S. laws against pornography be rescinded.

Nixon hated the report and denounced it, but Greenleaf Classics had the right to publish it in full since it was an official government document. Government reports, other than for classified material, are in the public domain. But what really pissed off Nixon was that Greenleaf photo-illustrated it—basically going for visual flip strength, since a lot of the report was pretty dry reading. Since the report covered every type of fetish and perversion, it went quite a bit further than your normal hardcore fuck book. It was pretty damn extreme.

I admired Greenleaf for having the guts to publish the report like that, and the conviction of the publishers was a gross violation of freedom of speech, but the real reason I hated to see Greenleaf shut down was because they paid better than any of the New York smut peddlers I was writing for.

What really irked me about the timing of this disaster, however, was that I had just finished writing a manuscript I was about to send to Greenleaf, and this was one I would have been proud to show my friends. I thought there was a good chance my new ploy to get humor past the editors might work.

When I took it out the next day to give it a quick read-through before typing it (writing was a real pain in the ass before computers with word processing programs), it was literally impossible for me to read a page without cracking up. A typical sentence might be something like:  “He got a good grip on her hefty gazongas, as he thrust his turgid meat spear into her steaming hair tunnel.”

Years later, I learned that Greenleaf Classics had been the original U.S. publisher of Terry Southern’s Candy—published under the pseudonym of Maxwell Kenton in 1958. As Candy was a novel I loved, and one that was nothing but humor, I realized that Greenleaf was not opposed to publishing humorous erotica. To me, this meant one thing:  the jokes I wrote in those manuscripts I submitted to them weren’t funny. Or, at least, the editors didn’t think so. I was submitting bad sex scenes, culminating in even worse jokes.

I know I had fewer skills as a writer in my early twenties. But I could spell. I didn’t make many grammatical errors. And like all young men at that time, my sense of humor had been honed to a rapier-sharp edge by years of watching the Three Stooges…

What happened to the infamous “meat spear” manuscript? Shortly after my agent had kissed me off with the death of Greenleaf, I sent the manuscript to a NY publisher—one I hadn’t dealt with before, but that had books on a rack in a San Fran smut shop—and, despite having included a postage paid return envelope, I never heard back from them. Assuming it was ever published, and published as it was submitted, it was the one porn novel I wrote I would love to have gotten a copy of. I kept a photocopy of the manuscript for years, but lost it in a house fire about twenty years ago.

[Editor’s Note: Arnold Snyder wrote for Greenleaf Classics under the name Lance Elliott (also spelled Elliot or Eliott on some of his titles).

The novels were published in Greenleaf’s Carnival Adult Library, Adult Books, and other imprints between 1971 and 1973.

His titles included More than a Father, Hot Loins on Ice, Her Classified Friends, Daddy’s Little Daughter, Reluctant Coed, and Make Me Come Daddy (subject matter was assigned by Greenleaf).

Reluctant Coed, Her Classified Friends, Daddy’s Little Daughter, and More than a Father are included in the Stanley Fleishman First Amendment Research Collection at UCLA.]

One Response to “The Lost Meat Spear Manuscript”