The Night I Said Prayers at Sapphire

Fortunately, we live in Las Vegas and we watch MNF at the viewing party that Sapphire throws each week during the football season. It was a full house and the excitement in the Sapphire Showroom was palpable.

As everyone knows by now, with just over 5 minutes left in the first quarter, Bills defender Damar Hamlin made a midfield tackle of Bengals receiver Tee Higgins. It was a good hit, but not extraordinarily vicious or violent. The defender seemed to take the brunt of the collision. Despite the the hit, Hamlin rose to his feet quickly in a normal fashion. However, once he stood up, he collapsed without any indication of bracing himself in self-preservation.

A typical play stoppage for a downed player went on for a few minutes longer than normal. Any football

insider or fan is used to the sequence … trainers, coaches and a team doctor come out and do what they are trained to do. Players, close to the action, and with more at risk than anyone, take a knee and silently watch the efforts to attend to the man down. If the time gets extended groups of players start to pray. The TV network takes a sober tone, then goes to a commercial break to gather themselves, and gather some revenue for the stockholders.

When ESPN got back to coverage it was clear that this was different. Players, who have seen and heard horrific knee contortions and the snap of broken bones had an unusual fear in their eyes this time.

A full EMS ambulance was on the middle of the field, not a yellow gurney. Then one of the ESPN announcers said something I’d never heard before .. they said the shocking words, CPR is being administered, and it has been happening for several minutes!

That’s when I said prayers for Damar Hamlin. I can honestly say that in the dozens of times I’ve been in Sapphire, I’ve never once said a prayer in that former exercise club, turned adult playground.

As the drama unfolded, no one knew what to do.

A.J. Trunk, the fantastic party host and emcee at Sapphire made a serious announcement that they would switch to the Vegas Golden Knights game in Colorado. The crowd started scrambling to get updates from social media.

News was scarce. Personally, I started to see polemical opportunists of all stripes start to speculate that it was another case of NFL CTE …. brain trauma. Any serious football observer knew that this hit, and the player’s reactions didn’t square with that analysis.

Others, including me, speculated that this was another case of a young and healthy athlete collapsing suddenly from myocarditis, driven be the experimental Covid-19 vaccine and boosters. As one friend nearby said, “If that’s what it is …. they’ll never admit it!”

Later into the evening, it became clearer that Hamlin suffered from cardiac arrest. He was given CPR, AED (defibrillator) and eventually intubated.

Into the evening the speculation on ’cause’ continued. Commtio Cordis was offered confidently by some. However, mRNA developer Dr. Robert W. Malone said, “The eager willingness of corporate media/bias/over diagnosis of Commotio Cordis for last nights tragedy is even worse than any vax injury bias.  Commotio Cordis is rare and requires specific conditions including pre-existing conditions in the patient.  Typically a baseball.”  (SEE THIS TWEET)

As the player and his family were being treated at the University of Cincinatti Medical Center … the pattern outside developed. The new rule in the media was, “speculate about CTE, Commotio Cordis all you want … just don’t speculate on anything related to big pharma vaccines.”

TVO readers should know this … Pfizer is the dominant advertiser for Pharma on NFL broadcasts. The developer of the leading Covid-19 shots has purchased 175 million impressions, constituting 65% of the category ad spending. $9.5 million dollars in the first half of the 2022 season.

I’ll continue to pray for poor Damar Hamlin and his family.  I’m hopeful he recovers and lives a long life. Someone or something convinced him to get a booster shot on December 26th. I hope it didn’t harm him. I’d like to know if the NFL or the Buffalo Bills forced him into that decision.

Back to the Surreal 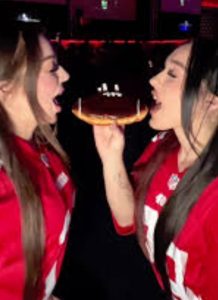 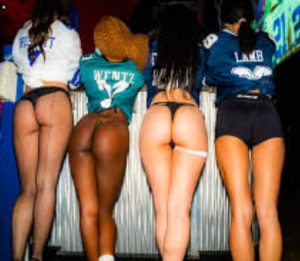 The hundreds of fans in Sapphire were helpless to do anything to make things right in Cincinnati. The hockey game was being shown on the giant screens, and the “jersey girls” were summoned backstage. For those of you who never been to MNF at Sapphire, one beloved tradition is a raffle of four NFL jerseys for the two teams playing that evening. Four Sapphire dancers, sell strips of tickets to patrons. Buy enough and they’ll measure the strip of ducats by wrapping around your beefy frame. In my case, that’s more tickets than the younger, skinnier guys at the nearby tables. Buy $50 your and you’ll get a lap dance as part of the purchase! And. if you’re lucky enough to win one of the jerseys, you’ll be invited on stage to remove the jersey from one of the sexy dancers. I’ve won a Kenny Pickett Steelers jersey, and an Aaron Rodgers Packer jersey this year!

On this strange evening, the decision to go ahead with the jersey raffle was made. Thankfully, it was done quickly and without a tragic announcement from the drama in Cincinnati. The club “pulled it off” if you will!

Even stranger, many customers were handed boxes of a new desert in town … Naughty Waffles. naughtywafflesllc@gmail.com is a waffle that has a striking resemblance to a woman’s vagina! I’ll let the pictures speak for themselves. They are tasty, light a slightly sweet thanks to a layer of icing on the side opposite of the ‘business end’ of her treasure.

Mr. TVO dove into his Naughty Waffles hungrily last night and went back for ‘seconds’ this morning with my coffee. Sorry for the third person language, I’m distancing myself in real time from this snack. Is it desert, or breakfast. 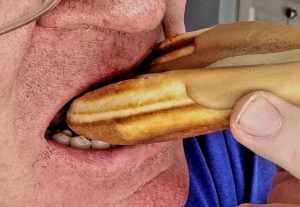 4 Responses to “The Night I Said Prayers at Sapphire”