Breaking:  Las Vegas Casinos Are Getting Visits from Gaming Control Today to Inspect Their Reopening Set-Ups 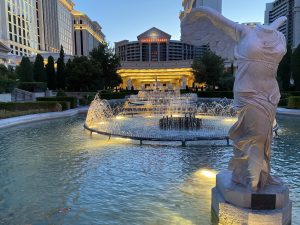 Caesars has Turned Its Fountains Back On

There have been rumors all day that Nevada Gaming Control has been inspecting Bat Plague safety installations in Vegas casinos today.  Finally, a local friend confirmed his casino had gotten the visit.

While TI and Wynn have announced reopening dates of May 22 and May 26 respectively, current shutdown orders last through May 30.  But rumors are saying the safety installations are actually getting approved.

Cosmopolitan Casino is taking room reservations (for the East Tower only) for June 4 and beyond.  We’ve seen this before only to be disappointed but maybe that’s changing now.

Remember, the Bat Plague safety installations are truly awful (see the poker table at left, and imagine that you are also required to wear a mask while sitting at it).  You can read the details here, and that post is not an exaggeration.

And Las Vegas casino valet layoffs are expected to be permanent.  Apparently no one can figure out a way for the governor to pretend he’s protecting the valets from pretend China Cooties.  The Las Vegas Convention Center is going ahead with layoffs of 350 employees as well.

And maybe once things get started we’ll see these restrictions die quickly.  At my local Whole Foods on Monday there was a new guard installed at the door enforcing the governor’s “strong suggestion” that everyone wear face masks to enter.  The guard and masks had disappeared as of yesterday.  They lasted two days.

Top search term on Expedia this morning was “Las Vegas.”

No word on the Vegas strip clubs reopening date yet.

I’m hearing that Bob Iger and several Hollywood studio heads, plus other top LA biz leaders, have had the little meeting with LA Mayor Garcetti. He went from “no reopen til a vaccine” to all sorts of things reopening in LA County today.

In the Bay Area, Alameda County has lost the battle with Elon Musk and is now allowing his Tesla plant to resume production next week.  But Musk resumed production there in defiance of their orders *this week* on Monday, May 11 and will not shut back down.

Tokyo, one of the most populous and packed-in cities in the world, had 33,106 total deaths from all causes in the three months through March 2020, 0.4 percent fewer than the average of the previous four years for the same period, according to data from the Tokyo Metropolitan Government.

Japan had some of the earliest confirmed Bat Plague cases in the world outside Wuhan.  Since virtually every hospitalized ScaryVirus patient has comorbidities (i.e. other stuff seriously wrong with their health), excess overall mortality is the best measure of actual deaths from Flu Manchu itself.  In Japan, there’s no evidence of ANY deaths from WuFlu itself.

Back in January, non-peer-reviewed studies were released by “scientists” in China that claimed Asians were especially susceptible to death from Chop Fluey.  All lies.

Do you remember two weeks ago when Fauci and Birx and the fake news Sino Snot Storm hoaxsters said Georgia’s and Florida’s reopenings were an experiment in human sacrifice?

Well, Florida’s new cases have actually declined by 14% compared to the previous week, and Georgia’s fell by 12%.

Never ever forget how they lied to you.

Yesterday the Wisconsin Supreme Court struck down Democrat Governor Evers’ shutdown orders and gave control of any statewide WuFlu health restrictions to a legislative committee controlled by Republicans.  The GOP-run legislative committee even has veto power over any future ScaryVirus orders by Evers.

The only parts of Evers’ order that remain in effect after the ruling concern school closings and eviction restrictions.

For everything else, including restaurants, bars, hair salons, sports stadiums and churches, the ruling went into effect as soon as it was issued.  There are now no statewide restrictions in Wisconsin forcing occupancy limits, special cleaning requirements, social distancing rules or temperature checks.

Bars across the state were flooded with patrons in the hours after the court’s ruling.

Since the ruling, the GOP-led committee has issued suggestions for bars and restaurants and other public spaces, but no rules or regulations.

Unfortunately, local government officials in Wisconsin are allowed to impose any restrictions they choose.  Naturally, cities and counties controlled by Democrats immediately issued their own lockdown orders.

Shooters Grill in Rifle, Colorado received a cease and desist order from the county public health department and Chief of Police after reopening its dining room in defiance of county shutdown orders.

Shooters prides itself on being a safe place for customers because all of their staff are armed.

If you live in the area, please patronize these patriots.  You can find their info here.  Remember, they are fighting for all of us.

Neighborhood kids playing together on the street responded by spraying water guns at the cops while yelling insults and shouting at them to leave.  The entire neighborhood, gathered on the street because their jobs are shut down, started laughing and hollering.

It reminds me of Democrat Chicago Mayor Lori Lightfoot’s walk through the hood, when she started yelling at kids on the playground to go home and they yelled at her to go home.

The cops got back in their patrol car and took off rather than enforce the Plague Hoax order.  There’s cell phone video of the whole thing.  You can watch it through the link.

Maybe it wasn’t the Hollywood tycoons who prompted the LA reopening.  Maybe these kids are the reason Garcetti is lifting his shutdown orders.  Or maybe it was Tuesday’s election in CA25.

There’s a huge shutdown protest going on right now in Minnesota outside the Democrat governor’s mansion.  You can see the footage here.

Didier Raoult, the French scientist who proved hydroxychloroquine cures 99% of WuFlu patients (92% of the most advanced cases), has now done a study of Chop Fluey antibody prevalence in Spain.

In this study of 60,000 people, he found active workers in “essential” jobs who continued to go out had a lower rate of infection with Covid-19 than those who stayed home during the lockdown. More data from the study here.

Will Fauci rush to the microphones to urge an end to the shutdowns to save peoples’ lives or nah?

Not Las Vegas Reopening but Fun

Miss Lindsey, Senator of South Carolina (sorry if he’s your Senator, I know he did great on Kavanaugh), shot down any idea of requiring Obama to testify on Obamagate.

It doesn’t matter, because Senator Grassley of Iowa takes over the Judiciary Committee in November, and Grassley will go for blood.

But a great intel source remarked:

“Think Chess.
“Do you attack the KING in the beginning or middle-to-end?
“QUEEN protects KING?”

Once They’re Laughing at the Hoaxers We’ve Won

This guy nails the current state of Covid panic. And does so hysterically 😂#obamagate #q #qanon pic.twitter.com/yDkdyiSEG2

7 Responses to “The Recovery from the Bat Plague Hoax”