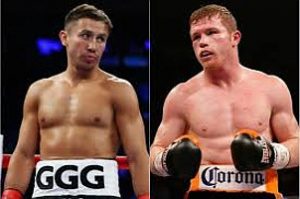 Canelo vs Golovkin is Coming September 16

The upcoming Canelo vs Golovkin fight is being billed as “Supremacy,” because the winner will come out the undisputed champ for the unified WBA (Super), WBC, IBF, Ring magazine, and lineal middleweight championship. That’s five championship titles for a single fight.

Canelo Alvarez’s record is 49-1-1, with 34 by knockout. (Canelo’s only loss, incidentally, was to Floyd Mayweather.) Gennady Golovkin’s record is 37-0 (33 by knockout). Both fighters are known for the power of their punches, so fight fans are expecting this to be a brutal confrontation between two seasoned fighters at the peak of their careers.

Vegas will be packed with fight fans, so if you’re planning to be in Vegas that weekend, even if you’re not a boxing fan, I’d advise you to make whatever reservations you need asap.

The fight is being held at T-Mobile Arena in Las Vegas on Saturday, September 16 and the Vegas strip clubs are prohibited from advertising their fight parties by the promoter, whose main interest is in selling tix to T-Mobile, where the lowest-priced seats available right now are $674.

That means I personally will be watching the fight with a girl in my lap at one of the following Vegas strip clubs, which all screen every PPV sports event:

Legends Room Las Vegas will be featuring free food catered by the Blind Pig, including Boar’s Head sandwiches, wings and Hebrew National hot dogs. Admission is free for locals (yes, free, so call the club now to reserve your place at 702-824-7176), $45 for out-of-towners in the main room, or $125 for the Members’ Area if you haven’t already reserved for $75. Porn megastars Tasha Reign and Jesse Jane will be hosting the fight after party in the Members’ Area. The club accepts bitcoin, ethereum, or LGD (the club’s own cryptocurrency) in addition to cash and credit cards.  Using LGD (available at the club) gets you a 20% discount on drinks, dances and admission.  That’s $8 beers with the tokens.

Sapphire has announced that Roy Jones Jr. will be hosting their after-fight party.  Their fight-viewing party will be $90 in the main room and $150 in the Showroom.  The Showroom party will include the club’s sumptuous buffet (always the best in town).  Call 702-869-0003 to get details and reserve your place at the current price (or reserve online at the club website, where there are also packages for groups).  The club is filling up rapidly for the fight and prices have been going up daily, so don’t delay.

Treasures will be screening the fight with a charge of $50 for locals, $75 for out-of-towners ($125 if you arrive by cab, Uber, Lyft or any limo but the free club limo).

None of these clubs paid me to put their names here, so none of them have just advertised their fight parties. But when you show up at the door, tell them Arnold sent you.

One Response to “The Top-Secret, Hush-Hush Canelo vs Golovkin Fight Viewing Parties in the Vegas Strip Clubs”