Tasha Reign is a Regular Feature at Legends Room

I spent decades in the world of professional gambling, as a researcher, a player and a writer. It was great fun and very profitable but I consider myself retired and now devote myself full-time to looking at pretty girls in my favorite Vegas strip clubs.

I had zero interest in cryptocurrencies—investing in them, trading them, or speculating on them.  I couldn’t have cared less about Bitcoin’s moon shot move from 981 in March to over 5000 in September.

The first thing that ever interested me about cryptocurrencies was the opportunity to get a real discount on lap dances by using one at a new Vegas strip club, Legends Room.

Now, a number of Vegas strip clubs have offered dance discounts that didn’t really pan out.  Most commonly, a club tries a sporadic 2-for-1 deal on dances or offers discounts during certain hours. The problem is customers often find many dancers simply won’t accept the lower price.

The $20 lap dance has proven to be a hard nut for Vegas strip clubs to crack.

Until now.  Legends Room is making their 20% dance discount work by having the club pay for the discount instead of the club’s dancers.  The dancers get the full $20 (or $150, etc.) that a beautiful woman so richly deserves for a high-mileage dance.  The customer pays the reduced price of $16 (or $120, etc.) for a dance.  The club makes up the difference.

Again, the dancer gets the full club price.  You get a discount.  The club makes up the difference. 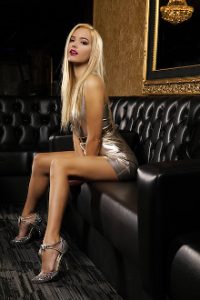 Kenna James is a Regular Feature at Legends Room

If you’re already set up for trading cryptocurrencies, you can buy LGD tokens online on Bittrex.

But what if you’re like me and you’re not already set up for trading cryptos and you’re not sure you ever want to get set up?  You can buy LGD tokens at the club itself at the current Bittrex price, which is displayed on video monitors in the club along with the current price of Bitcoin and Ethereum, which the club also accepts (but which don’t earn the discount).

The club also has a Bloomberg terminal for guests who want to check the latest prices of their stocks and bonds.

The club will help you install a free app on your phone that serves as a “wallet” for the LGD tokens.  And there will eventually be software in place that automatically applies the discount when you pay with LGD.

But for now you go to the club cashier, tell her how much you want to spend that night on drinks and dances, and give her that amount in LGD.  For every $100 in LGD tokens that you give her, she gives you $120 in cash.  Spend the $100 you planned to spend on five lap dances, keep $20 in your pocket, and those lap dances will have cost you $80, or $16 each. 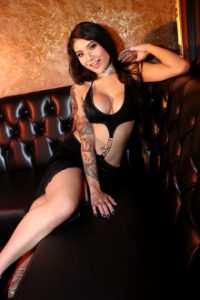 Cryptocurrencies trade on markets and fluctuate in value just like the dollar and euro on the Forex and futures markets.  Obviously if you’re buying LGD for the night and selling them immediately to get your lap dance discount, you don’t have to worry about fluctuations.

But, as a professional gambler, I couldn’t help thinking about whether I might do even better than the 20% discount simply by buying LGD but not using them until the price goes up.

Legends Room offers memberships that gain you access to the Members’ Area of the club, which offers parties hosted by celebrities as well as special comforts.  For example, the Members’ Area offers big leather easy chairs and sofas for watching the stage show and getting lap dances instead of the usual club chairs.  And the private VIP rooms are larger in the Members’ Area.

Plus, VIPs in the Members’ Area get first crack at the club’s featured hosts and performers, from UFC Hall of Famer Stephan Bonnar to a collection of porn stars with whom the club has contracts for exclusive live performances.  A few of the stars are in residence at the club every weekend.  The scrumptious Brenna Sparks and Rachel Starr were in residence last weekend.  Penthouse Pet Kenna James, Kat Dior and Edyn Blair will be in the club for the UFC 216 weekend.  Jesse Jane, Tasha Reign and Rachel Starr will be hosting the club’s Halloween party.  You can watch them on stage, get private dances with them, flirt with them, or talk to them about your problems with your girlfriend.  Whatever, you’re at the front of the line.

A lifetime membership requires a purchase of 5000 LGD tokens.  You have to maintain a balance of 5000 tokens to remain a member.  You can purchase the tokens with cash or credit card or by wire transfer, or with Bitcoin or Ethereum.

If you’re interested in becoming a member, you might want to purchase your membership at a time when the cryptocurrency’s fluctuations are more likely to move in your favor.

First, the fundamentals.  Peter Klamka, Legend Room’s cryptocurrency specialist, says the club has already sold 1000 memberships.  Legends Room members include a rap star, MMA stars, and a venture capitalist—not guys who are likely to scurry to take profits when the cryptocurrency bumps up a few points.

And Bitcoin pioneer Charlie Shrem announced his Legends Room membership on Twitter on April 17,  2017.  You may have seen Shrem in Banking on Bitcoin, now playing on Netflix.

Shrem is a founding member of the Bitcoin Foundation and was co-founder of BitInstant (a Bitcoin exchange that allowed customers to buy Bitcoins in hundreds of stores).  BitInstant was processing roughly 1/3 of all Bitcoin transactions before the company’s demise after Shrem was arrested for enabling transmission of money to Silk Road.  Shrem is a crypto high roller on a mission to free the world through the free flow of capital, another guy not likely to let go of his investment easily.

Shrem told Fortune his current view is that instead of one supreme digital currency (Bitcoin), there will be cryptopluralism.  Due to limitations in its code, the Bitcoin network can process roughly seven transactions a second (VISA handles thousands).  There appears to be no consensus yet on what to do about that.

And while Bitcoin has strengths as a store of value and global payments network, it’s not great for building other functions.  People like Shrem believe that rather than try to make Bitcoin fit all purposes, it’s better to let a thousand cryptocurrencies arise, each focusing on what it does best.

Enjoy VIP Status While You Benefit from the Club’s Success

Tokens like LGD tend to be built for specific applications such as peer-to-peer betting markets or advertising platforms.

And while digital currencies like Bitcoin are mined, tokens are distributed in crowd sales known as Initial Coin Offerings (ICOs).  Afterwards, they trade on exchanges.

The crowd sale serves to raise funds and give investors first crack at a piece of the new service.  Essentially, it’s customers financing a company and getting a benefit not only from its new services but also from its success (through a rising token price).  Brock Pierce of Blockchain Capital calls ICOs the next step in crowdfunding.

Legends Room is a high-end Vegas strip club with high dancer standards, good parties, and a built-in base of Bitcoin high rollers.  A membership gives you VIP status at the club to enjoy while giving you a share in its success if LGD tokens go up in value.

And the owners of Legends Room are actively working to increase demand for LGD through expanded acceptance of the cryptocurrency in Las Vegas.  The Blind Pig, a high-end deli at 4515 Dean Martin Dr, at the foot of those luxury blue-glass condos, will reportedly be accepting LGD later this month.

Vegas seems a good place for a crypto economy to take hold because we’re already used to dealing with an alternate currency—casino gambling chips.  In this town, locals pay their electric bills at casino cashier windows using chips from their blackjack wins.  Pro gamblers tend to hang on to casino chips for future plays rather than cashing out every time and generating endless government transaction reports.  Cabbies and waitresses routinely get tipped in casino chips.  And local porn stars who run their own cam sites and who’ve been shut down by Paypal and Mastercard a dozen times accept Bitcoin from their cam fans.

To sum it up, LGD is the cryptocurrency of an innovative high-end Vegas strip club with a lot going for it and a team aggressively working to expand demand in a location already comfortable with alternate currencies.

To be sure, cryptocurrency speculation is not for everyone.  It’s a form of professional gambling, which is always about the odds.  No one can predict the future.  You could lose all the money you invest.  Always do your own due diligence if you’re looking to speculate with an amount of money that is dear to you.

Finally, a Vegas strip club where you can make money getting lap dances. Even if you’re not interested in a membership or longer-term bet, you might want to take advantage of that juicy dance discount.

I asked a friend who trades currency futures based on technical analysis what the charts said about LGD’s prospects. 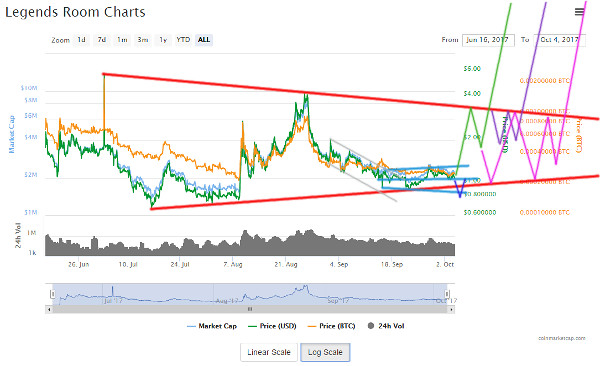 Reportedly LGD is near the bottom of its recent trading range, likely working on a long-term base. 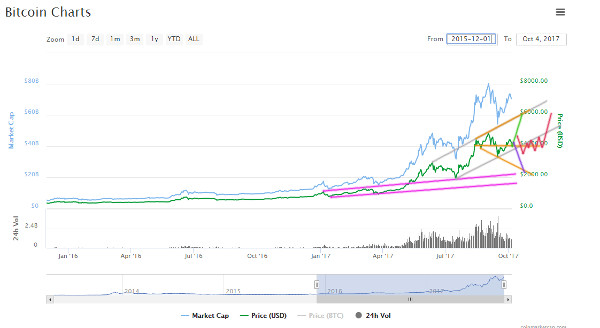 Bitcoin is in a Price Channeled Move that Could Go Parabolic