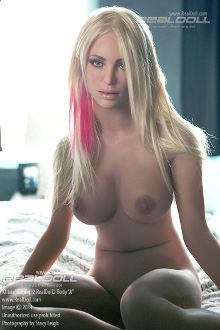 Next Year This RealDoll May Be Smarter Than You

If you’ve had it up to here with sexual relationships that never seem to satisfy, perhaps it’s because you’re trying to have sex with human beings, a species notably hung up and neurotic. Isn’t it time you considered having sex with a robot?

The Third International Congress on Love and Sex with Robots will be held in London on December 19-20, 2017. This is an academic conference with dozens of papers being presented by sex robot experts.

If you are an expert on this subject, the submission deadline for papers is June 30. Among the topics covered will be Robot Emotions, Humanoid Robots, Entertainment Robots, Robot Personalities, Teledildonics, Intelligent Electronic Sex Hardware, and more. For a complete list of topics and submission guidelines, see the official LSR website (link above).

In October of 2015, we reported that the Second International Congress on Love and Sex with Robots, scheduled to take place in Malaysia, was canceled at the last minute by Malaysian authorities because sex with robots is against the law in Malaysia. (See Sex with Robots Declared Illegal in Malaysia.) That conference did take place the following year in London.

One of the more interesting papers at that conference was presented by Jessica M. Szczuka and Nicole Kramer of the University of Duisburg-Essen in Germany. They conducted a survey of 263 heterosexual men between the ages of 18 and 67, who were shown a video of different female sex robots and then asked if they would buy one of these robots within the next five years. 106 men (40.3% of those surveyed) said they would buy one if it were available.

Unfortunately, women were not similarly surveyed, so we don’t know how many women would buy a sex robot.

I’m guessing sexual will be popular.