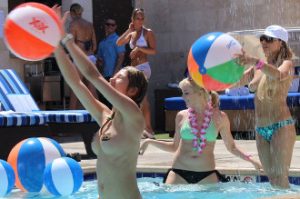 You think you don’t want to go outside this weekend because it’s 105 or 107 degrees.  Here’s where you’re misguided in your thinking:

When it’s 80-90 degrees in Las Vegas, girls at the topless pools tend to spend the afternoon lying on their stomachs on their lounge chairs, falling asleep and getting a back tan without a bikini line.  But when the temps hit triple digits, there’s no way a girl can stay in a lounge chair.  And that, fellas, means the official beginning of titty-ball season.

Titty-ball aficionados are grabbing their hats, shades and sunscreen and rejoicing at the hot weather, because this is the kind of heat that gets the topless girls into the water and splashing around.  The water isn’t 107 degrees—it’s clear and cool and refreshing—while the water evaporating from your skin in the desert air chills you down.  And while nobody wants a pina colada or mojito when it’s 68 degrees, girls tend to chug them when it’s 107 outside.  That does a lot to get and keep a party going.

We have had multiple TVO readers reporting nipple sightings at Stratosphere’s Radius Pool and Mandalay Bay’s Moorea Beach in 2019. There will be topless women wading in the pool at Wynn as well, but that’s a different kind of topless pool scene.

But topless girls are jumping for beach balls by the dozens at Sapphire’s topless pool, where the bartenders, cocktail waitresses and go-go dancers are all topless, Vegas showgirls come to party, and the gorgeous topless girls with the pink wristbands are Sapphire’s own uninhibited dancers there to flirt, catch a buzz and say yes if you ask them to go to the VIP.