Tonight we’ve got the best MNF game so far this season. It’s the Houston Texans vs the Denver Broncos and both teams are currently 4 – 2 and in serious contention for the AFC conference championship, with only the Patriots and Raiders with better AFC records.

A side story on this game is that the Texans’ quarterback (Osweiler) was the Broncos’ quarterback last season — replacing the injured Peyton Manning — and led the Broncos to the Super Bowl, only to be replaced in the Big Game by the healed Manning, who got the credit for the Super Bowl win. Then Osweiler got traded to Houston, and you can bet he has a real chip on his shoulder when it comes to the Broncos.

Once again, the stakes in this game are huge and the emotions will be going wild. Watch for fights, brawls, and lots of penalties as these teams go for maximum brain concussions. It’s going to be a sick, twisted, violent game — the kind of game fans love.

As for me, I love football, but I have a weak stomach. I get queasy and ill watching all that savagery and brute barbarity. Thank heavens, Palomino Club (club review / club website) is screening the MNF games this season, because Palomino has nude dancers on stage during the game, with dancers available throughout the game for lap dances and fully nude private VIP dances.

Any time I hear a bone crunch, I can ask the nearest hot babe to take me into one of Palomino’s private, curtained VIP booths and get naked for me. Nothing takes the edge off a man’s misery like the sight of a beautiful pussy.

Palomino is the only strip club in Vegas with a full bar, dancers who get naked on stage and in the private VIP shows, and the Monday Night Football game on nine screens.

During the game, there are $30 domestic buckets, $35 import buckets, and $8 shots. (If you come in a group, the biggest group gets a free bottle the following week.) 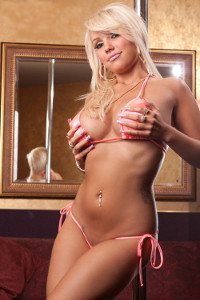 Felicia is a Sapphire Gem

On the other hand, Sapphire (club review / club website) has a unique approach to relieving the football fan’s tension from witnessing the bone-crushing pain and agony on their big screens — the club’s legendary halftime dollar dance tsunami.

For ten minutes, with nothing more than a handful of one-dollar bills, you can snuggle up with a series of hot topless babes who are there for one reason and one reason only — to replace your painful memories of the on-screen violence with a squirming hot ass in your lap and bare tits in your face and in your hands. Now that’s what MNF is all about in Vegas. (See The Best Lap Dance in Vegas.)

Sapphire’s $22 cover charge includes their buffet (with the best food in Vegas) plus two drinks. They’ve also got the biggest HD monitors and the biggest, rowdiest crowd. A $150 season pass gets you into all MNF games for the whole season (with the buffet and two drinks per game), plus the Super Bowl party (still a great deal).