Gettin’ Wet in the VIP

Liquid Lapdance is a new type of underwear that’s been specifically designed to make lap dances more “climactic” for men. The product was created by a visionary Las Vegas company that’s been around for a couple years. From the Liquid Lapdance website FAQ:

“Regular clothing is dry, rough, and uncomfortable during lap dances.  Guys may experience abrasions, discomfort, and other minor injuries of the penis during dry dances.”

As a longtime lap dance aficionado, I’ve personally never suffered any “minor injuries of the penis” from getting lap dances, but the Liquid Lapdance website alerted me to the fact that some men might be having such problems. The website further informed me that even if a guy wasn’t regularly experiencing penile trauma, Liquid Lapdance pants were designed to make lap dances more enjoyable.

For personal reasons, I’ve never tried to have an orgasm during a lap dance. Nevertheless, I felt it was incumbent on me to field test this potentially beneficial product for TVO readers.
I ordered a pair ($20 + $4 shipping). You may be interested to know they are also available at a discount in 3-packs and 12-packs.

While I was waiting for my lap dance pants to arrive, I went back to the FAQs for more info. Here’s what I learned:

1. You put them on before leaving home, and the company claimed you could wear them all night. The FAQs stated that the  pants were comfortable to walk in, but recommended that users sprinkle some baby powder on the crotch area so the latex wouldn’t irritate their skin. (That sounded ominous.)

2. The website was emphatic that nobody could tell when you were wearing their product. (That was a relief.)

3. They said everyone agreed that Liquid Lapdance pants made lap dances feel much better. (Cool.)

4. Further, the website stated that if a user didn’t have an orgasm from a lap dance while wearing their product, there was a money-back guarantee. In fact, they claimed it was not uncommon for guys wearing Liquid Lapdance pants to have 3 or 4 orgasms in a single night!

5. Importantly, the dancers providing said orgasms wouldn’t know you’d had them since there wouldn’t be any wet spot.

6. Liquid Lapdance pants were reportedly “one size fits all.” (I wondered how that worked.)

7. A single pair of Liquid Lapdance pants was designed to last 3-5 nights in the strip clubs, provided they were washed between uses. (Okay, so 3 to 4 orgasms on 3 to 5 nights meant you’d get 9 to 20 orgasms from a single pair—pretty inexpensive on a per-orgasm basis.)

I surfed around online for more information and discovered a U.S. Patent application (US 09/904,255) for a device called a “Lap Dance Liner,” complete with illustrations.

An Idea Whose Time Had Come

From the US Patent application description: 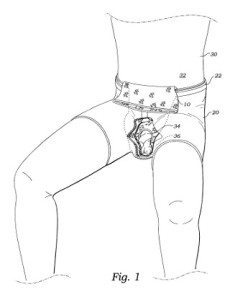 A combination pouch and underwear pant is worn by a man for facilitating sexual activity such as lap dancing. The pouch is worn over the sex organs of a man and under the underwear pant …

With the pouch in place, the motion of a lap dancer against the outer clothes of the wearer is able to cause the roughened surface of the pouch to slide against the penis in such a manner that the penis is stimulated so as to simulate intercourse …

A primary objective of the present invention is to provide a lubricated, loose fitting liner … enabled for capturing body fluids, such as ejaculate, protecting the user’s clothes and facilitating cleanup … A final objective is to provide a device as described which is not noticeable when worn.

The patent application had been filed in 2001. It struck me that Liquid Lapdance pants were the fruition of ten years of research and development, the realization of an inventor’s dream.

The plain, unmarked parcel arrived in two days, having been sent via first class mail. Included with the lap dance pants and enough lube for one use was an instruction sheet that explained the cleaning and storage recommendations, how to put the garment on, and what kind of lube to use. 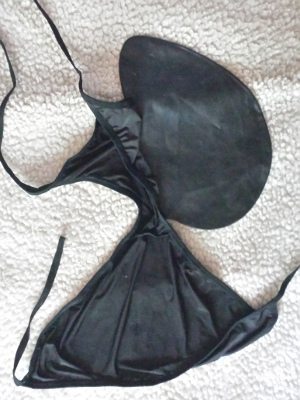 The instructions were clear and detailed, e.g. “Wear lap dance pants under your pants.”   And, “Choose a dancer with a big butt.”

Please note the photo of the Liquid Lapdance pants at right. In the photo, the front of the garment is on top and the back is on the bottom. That egg-shaped part on the top right is the latex pouch into which the user inserts his dick and balls. It measures 11 ½ inches from the top to bottom of the egg, so it should have no difficulty accommodating most men’s genitalia with room to spare.

The rest of the garment is a stretchy spandex material with string ties to fasten it at the hips. Simply put, it’s a black string bikini with a big latex pouch stitched onto the front end for holding dick and balls.

I couldn’t wait to give this thing a test run.

My Additions to the Liquid Lapdance Instructions

The instruction sheet enclosed with this product is fairly comprehensive, but there are a few instructions they forgot to include. Here are my additions:

1.  After you put the lap dance pants on, don’t look in the mirror. Just don’t.

2.  Don’t let your wife see you in them either, because when you see her reaction, you’ll have to go look in the mirror.

3.  If you get stopped by the cops and searched, tell them you have a scrotal hernia and you’re wearing a doctor-prescribed truss.

4.  If you get put in the clink, definitely remove the garment before you meet your cell mates.

I, of course, made the mistake of letting my wife see me in the garment. Her laughter was not conducive to my confidence level. “It looks like a giant turkey wattle,” she said. I looked in the mirror. It didn’t look like a turkey wattle to me. It looked more like I had an elephant ear growing out of my crotch.

The company is sensitive to the fact that many men will have to hide their lap dance pants from their wives, fiancées, girlfriends, mothers, sisters, daughters, grandmothers, and pretty much any female on the planet, so there is a stealth packaging option available for the 3-pack. Here’s the way it comes: 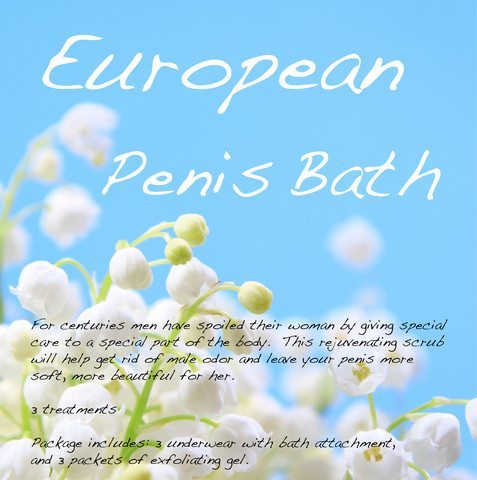 The dances at Sapphire are also the highest mileage in town, and this was critical. “Why?” asks the lap-dance amateur. Because I’m trying to test these damn pants and I need maximum crotch friction. Nude lap dances are great but naked dancers just don’t provide the same kind of aggressive humping action as dancers who are wearing protective g-strings.

Everything was going according to plan. Instead of my typical Corona, I opted for a fine glass of Cabernet. It was early in the evening but there were already gorgeous women filling the club and they didn’t let me down. In fact, I was so engrossed in girl-watching that I hardly noticed when a dancer took the seat beside me until she introduced herself. She asked me if I wanted a dance.

Remembering the guidelines on the Liquid Lapdance instruction sheet (choose a dancer with a big butt), I discreetly checked her out.

“Is it still twenty?”

She led me to a couch in the far corner. It was dark and more private.

For the first song, all I could think about was whether or not the lube was squeezing out somewhere, if all of the sudden she’d jump and say what’s-that-on-my-leg? Kinda hard to get turned on when you’re thinking like that, but on the other hand, to my surprise, it was kind of hard not to because these lap dance pants were really something different. My dick was nestled inside this large latex pouch whose inside walls were coated with a gelatinous lubricant and every time she moved on my lap, my dick started slippery-sliding around like an eel trapped in slime. But damn if it didn’t feel good.

“Do you want another?” she asked.

She went right back to the classic lap dance hump and I forgot all about the slippery stuff that might escape any moment and horrify her. I was just watching her ass. Feeling her ass.  She was very fine.  It was a spiritual thing. I was becoming one with her ass.

The song ended and I paid her forty bucks without her giving me any strange looks. Then I went directly to the men’s room. I had to see if there was any lubricant (or whatever) on my cargo shorts. I looked at myself from every angle in the mirror. Nothing. The Liquid Lapdance pants had performed to perfection.

I had to take a leak. I went into one of the stalls for privacy.  I reached into the elephant ear and quickly became aware that my equipment was thoroughly coated with a gooey, gloppy slime. I pulled out my dick and the slime started dripping onto my pulled-down cargo shorts. I’d made it through the dance okay, only to get goop on myself afterwards.

As I peed I considered my options. My dick and balls were a fucking mess and I was in a public restroom. I needed to take a shower. I needed at least a washcloth and some running water. Running water was available but I couldn’t stand at a public sink washing my slimy genitals. What if another customer came in? At the very least, I needed a real European Penis Bath.

I quickly reinserted dick and balls into the warm, slimy environs of the elephant ear. They were safe in there. There were no leaks. I could just drive home and take care of everything in my own bathroom.

My wife asked me how the test went. I told her it was a success. The product performed as advertised. “Then there’s the angle for the story,” she said, “because who ever would have thought something like that would really work?”

I threw away the Liquid Lapdance pants without bothering to clean them. I had the cleaning instructions and they would still be good for 2-4 more strip club outings. But I realized I like lap dances better when I don’t come.

But hey, that’s just me. As lap dance products go, these things definitely live up to their claims. If you’d like to try them out for yourself, here is where you can buy them: Liquid Lapdance.

(Disclaimer: I have no financial interest in this product.)

Where to Go for High Mileage in Vegas

How to Sit for a Lap Dance

What to Do With Your Hands During a Lap Dance

Can You Get Sex in a Vegas Strip Club?