Where to Find an Open Strip Club Tonight 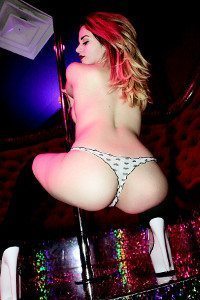 Serenity at Little Darlings,
a Deja Vu Club in Vegas

If you’re looking for open strip clubs in the U.S., it’s hard to find dependable information that lasts more than a few days.  I get emails daily from TVO readers all over the country in shutdown states telling me their favorite strip club has reopened with lap dances and mileage to the max.  They beg me not to post the info on TVO because publishing it might get the club shut down.

Then a few days later they write me again and say the club got shut down anyway.

I figure if you’re a regular at your local strip club, you already know whether it’s reopened and whether masks are required and lap dances are allowed.  But it’s hard to recommend you travel to go to any strip club, because by the time you get there it might be shut down again.  You need to travel by private jet to get to an open strip club these days.

I asked Ryan Carlson, General Manager of the Deja Vu strip clubs in Las Vegas, which are still closed, what was happening with the Deja Vu clubs around the country.

Carlson says Deja Vu now has 30-40 strip clubs open in states other than Nevada. (Deja Vu often owns multiple clubs in a single city.) Because of the pent-up demand, clubs in Lexington, Kentucky,  Oklahoma City and Smithville, Texas were so busy their second week that they broke their all-time records.

Unfortunately, Texas just shut down all strip clubs in the state again this morning. Carlson says some Deja Vu clubs in other states “have been very slow or tanked,” but most are somewhere in the middle or close to normal.  Deja Vu’s Florida strip clubs were doing well, but they also got shutdown again this morning, not by the governor or mayors but by Halsey Beshears, the cabinet secretary in charge of bars.  Beshears’ family business is growing weed, so I expect someone with a brain to call out the conflict of interest fast.  I do not expect this second Florida shutdown to last.

Carlson says all of the open clubs in other states require masks on staff, some require them on guests and/or dancers, but “lap dancing is happening at all clubs.” He says the best states right now for strip clubs are Arizona, Oklahoma, Alabama and Tennessee.

Carlson also says some clubs in California are “producing close to normal numbers,” though they have mandatory masks for all employees, dancers, and guests, and his lobbyist informs him that California strip clubs may be shut down again soon.

The Bat Plague Hoaxes are Getting Debunked Faster

A Sign the End of the Hoax May Be Near

A new study to be published in Cell found that 50% of blood donations between 2015 and 2018 test positive for Covid-19 as well, even though Covid-19 didn’t exist at the time.

Then, when too many people got hip to the antibodies scam, the Bat Plague hoaxers took care to create “rising hospitalizations in Texas.”  The way it works is that everyone admitted to a hospital for any reason gets tested for Covid.  If you have coronavirus antibodies, you are suddenly listed as a “new case” whether you have symptoms/an active infection or not.

The good thing is that this particular hoax was debunked in less than 24 hours.  CEOs at other Texas hospitals were the first to call it out, and I doubt they’re going to allow their institutions to sink into bankruptcy over this hoax.  None of them are full; there is no danger of running out of hospital space.  I’m sure the Texas governor’s phone is ringing off the hook as I type this.  So I expect Texas strip clubs to reopen soon as well, after enough time for the governor to save face.

When the Bat Plague hoax first got going, it took many weeks to debunk the fake claims.

In the meantime, I’d welcome info from any TVO readers that care to share reports on open strip clubs anywhere.  You can share it either by email or in the comments. Please tell us the mask policy, whether the dancers can dance topless or nude, how the social distancing works, and whether or not lap dancing and private shows are allowed.  Info you know from your own visit to a club is more helpful than news reports, because I’ve found news reports on strip club reopenings right now are mostly wrong.

I was planning to make a trip to Tijuana to check out some of the strip clubs south of the border, but Carlson informs me that strip clubs in Tijuana are also shut down.

Right now, Palomino Club is the only open strip club in Las Vegas.  I will get into Palomino Club on Saturday night and see how they’re doing under the Nevada governor’s new masks-for-all mandate.