Look for the Best and Most Violent Fights of 2017 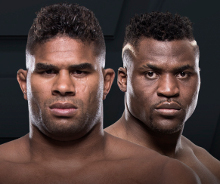 The UFC Featherweight Championship bout features flashy and aggressive Max Holloway, in his prime, vs José Aldo, who’s inflicted some of the most devastating injuries in the game with his kicks.  The lightweight bout is Eddie Alvarez vs Justin Gaethje, known for his relentless, hyper-violent finishes.

And the heavyweight bout will be one of the rare great heavyweight matches in MMA with Dutch-Jamaican Alastair Overeem  vs terrifying Francis “The Predator” Ngannou of Cameroon, who recently shattered the world record for punching power.

Overeem was K-1 champ when K-1 meant the best heavyweight strikers in the world.  He’s hoping to use his experience and technical skills to beat back Ngannou’s speed and overwhelming power. Overeem favors kicks to the body and legs, plus knee strikes from the clinch that have been described as “devastating.”

Ngannou is coming off five straight wins with five violent finishes as the 4th-ranked contender in the world vs top contender Overeem.  Ngannou is looking for a date with current heavyweight kingpin Stipe Miocic. It’s going to be bloody and blood goes better with boobs.

Deja Vu is Treating to Four Hours of Free Drinks 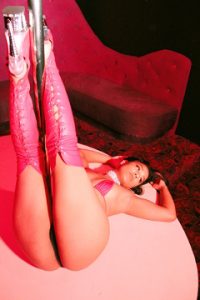 Deja Vu Vegas has an awesome free drink deal, and it’s the best deal you’ll find anywhere in Vegas for this fight. Deja Vu features a four-hour open bar (domestics and wells) from 6 pm to 10 pm every night of the week, including for their fight party.

You’ll drink free through the preliminary bouts and the main events, and you’ll probably still be drinking free when the fights are over and the dancers are on stage.

Total price:  $10 for locals, $20 for out-of-state, $45 if you take a cab, Uber, Lyft, or casino house limo. But why pay any cover charge at all? If you don’t have wheels, call for Deja Vu’s free limo and get free entry plus a free drink for after the open bar is over! That’s a far better deal than paying $59.99 for PPV at home!

Deja Vu Showgirls is a great club for sitting and flirting with a dancer while you watch the fight. After the fight, take your girl into one of Deja Vu’s comfy private bedrooms (with a real door you can close behind you). Bedroom prices are 15 min/150; 30 min/250; 60 min/500, which is why Deja Vu Showgirls is one of our top Vegas strip clubs for getting the most for your money.