The Most Exciting UFC Fights in Recent Memory 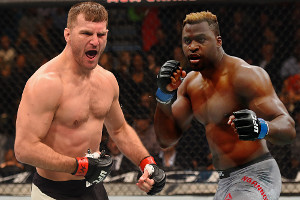 This Saturday night, January 20, UFC 220 presents a pair of title bouts at the top of the card with some of the most dangerous fighters in the sport.  The heavyweight title match features well-rounded champ Miocic, just one win away from breaking the division record for title defenses, vs Ngannou, a 6’5″ hulk of a man known for his meteoric rise and violent finishes.

Ngannou is looking to become the UFC’s Mike Tyson.  Bleacher Report says, “Not a man alive can survive his left hand.”

Plus, UFC 220 will feature a light heavyweight title fight between reigning champ Daniel Cormier and Volkan Oezdemir.  Swiss-born Oezdemir, like Ngannou, possesses brutal knockout power.  But unless Oezdemir can knock out Cormier early, expect Cormier, a former Olympian, to turn the match into a wrestling clinic.

The Pay-per-View charge on this UFC event is $65 if you watch it at home, where you probably don’t have topless girls to fool around with whenever you get the urge. And you know personal combat sports go better with boobs.  So, get your bets down in a casino sports book (no titties on display there either), then head to a Vegas strip club where the scenery is superior. 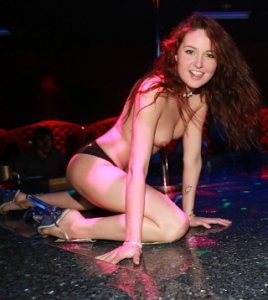 Topless Deja Vu Vegas maintains its rating as best Vegas strip club value for UFC fans by treating guests to an open bar for domestics and wells from 6 – 10 pm on fight night. That means you’ll drink free through both the preliminary bouts and main events, and you’ll still be drinking booze on the house when the fights end and the topless babes take over.

The cover charge is $10 for locals and $20 for out-of-staters, or $45 for anyone who arrives via cab, Lyft, Uber or casino house limo. But you pay no cover at all if you call the club for their free limo transport.  Arrive by the free club limo and you not only get in free, but get a ticket for another free drink for when the open bar is over.

Hustler Club is also screening the fights, though no details are posted. Expect $50 admission for those who arrive by cab. Locals free with Vu card. Topless, full bar, 21+