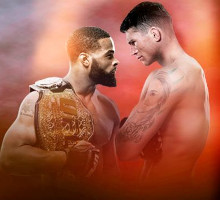 UFC 228 is on Saturday night, September 8, and the best place to watch the fights will, as always, be in the Vegas strip clubs, because the booze flows freely (and cheaply) and blood sports always go better with topless girls.

Tyron “The Chosen One” Woodley has already successfully defended his Welterweight Title against three challengers.  Now Darren Till, a former Muay Thai kickboxer from Liverpool, is taking him on.

Woodley has been pursuing a Hollywood acting career while he defended his title, with roles in such recent hits as Straight Outta Compton and Kickboxer:  Vengeance.  He says he doesn’t even like fighting.

Till says he’s focused on “absolutely f*cking destroying Tyron Woodley.” Both of the 170-pound fighters have beaten Stephen “Wonderboy” Thompson, one of UFC’s elite strikers, but 22 out of 25 media outlets scored the Till bout in favor of Thompson, so Till has something to prove.

Deja Vu Vegas always has a great party for the UFC fights. With a four-hour open bar (6-10 pm) for domestics and wells, this is the best drink deal you’ll find in Vegas for UFC fight parties. No other strip club, sports bar or casino UFC party even attempts to compete with that deal.

Plus, for out-of-staters, if you arrive at the club via the club’s free limo, you’ll also get free admission and a voucher for another free drink for when the open bar ends!

So, don’t waste $65 for Pay-Per-View at home. If you don’t arrive by the club’s free limo, admission for this event is $20 for locals or out-of-state, or $45 if you take a cab, Uber, or anything other than your personal vehicle — still a fantastic value with four hours of free booze!

UFC fights are perfect events for hanging out with the club’s dancers while you drink free and watch the fights. When the mood hits, you can take your favorite girl into one of Deja Vu’s comfy private bedrooms (with a real door you can close behind you). Bedroom prices start at 15 min for $150, or roughly what other Vegas topless clubs charge for the group VIP. This is why I rate Deja Vu as one of the best Vegas strip clubs if you’re on a budget.

Hustler Club is also screening UFC 228 with an open bar until 8 pm. Expect $50 admission for those who arrive by cab, or $40 if you arrive by the club limo (you get two drinks with that). Locals free with Vu card. Topless, full bar, 21+