Max Holloway vs Brian Ortega for the UFC Featherweight Championship

On Saturday night, December 8, UFC Featherweight Champ Max Holloway (19-3-0) will defend his title against the undefeated Brian Ortega (14-0-0). This fight was supposed to take place at UFC 227 in July, but Holloway pulled out due to symptoms of a concussion.

Although Holloway has three losses on his record, he hasn’t lost a fight since 2013 when Conor McGregor beat him on a unanimous decision. Both fighters are 27 years old and should be in their prime. Holloway has a huge fan base because he’s so much fun to watch. He’s 5’11” but he only weighs 145 lbs. The guy’s a scarecrow. (By contrast, Ortega is 5’8″ and weighs 145.) Yet, Holloway keeps beating the crap out of these muscular apes he faces in the octagon. In his 22 fights, he’s never been knocked out. He’s so fast and so tricky, no one can touch him. This should be a great fight. 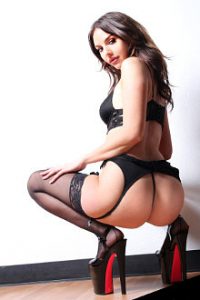 Deja Vu Showgirls will be screening UFC 231 with a $20 cover for locals and out-of-staters who arrive in their own transportation. There’s an open bar for domestics and wells from 6 – 9 pm. Better yet, out-of-staters who arrive in Deja Vu’s free limo will get in for free and get a voucher for a free drink when the open bar ends. Call (702) 308-4605 for the club’s free limo transport (or text SGLV to 702-767-8118). Deja Vu has the best private bedroom dance prices of all the Vegas topless clubs, starting at only $150 for 15 minutes, or about what the other clubs charge for the group VIP. You may also be interested in Deja Vu’s VIP package deals for groups and couples. Topless, full bar, 21+

Crazy Horse III has a $50 package that includes transportation to the club, entry and free pizza. $20 buckets. Topless, full bar, 21+

Hustler Club is also advertising a screening party for UFC 231 with no details. Expect $50 entry for out of state or $40 if you take their limo (includes 2 drinks). Locals free with Vu card. Topless, full bar, 21+