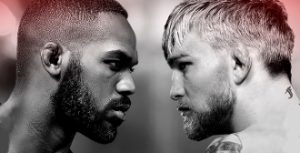 UFC fan favorite Jon Jones (21-1-0) wants his light heavyweight title back and he’ll have to beat Alexander Gustafsson to earn it. Jones has a “colorful” UFC career, to say the least. He’s been suspended three times — once for a hit-and-run incident and twice for doping violations.

The current light heavyweight champ is Daniel Cormier — whom Jones has already fought twice and beaten twice (once by unanimous decision and once by KO) — but Cormier has moved up to the heavyweight division and won’t defend his light heavyweight title against Jones. Cormier is 22-1, with his only loss being to Jones, but was 22-2 (with both losses to Jones).  One loss by KO was declared no contest when Jones was suspended for doping.

Some might think Cormier is scared shitless to go back into the ring with Jones, a fighter who’s already bested him twice and a man that no fighter yet has been able to beat in the octagon. Although Jones’ record is 21-1, he’s never actually been beaten. His one loss was in 2009 because he was disqualified for illegal use of his elbows. Hopefully, Jones’ doping problems are behind him and he’ll regain the title that many feel he never should have lost.

So, the UFC is pitting Jones against Gustafsson, another former champ, and the winner will be declared the light heavyweight champ, stripping Cormier of that title.

The fight is being held at T-Mobile Arena in Vegas on Saturday, December 29. Tickets to watch the fight live run from $220 to $3000+, but the best seats are in the best Vegas strip clubs where the big HD screens are better for viewing the action than the $2000 seats at T-Mobile. Plus, you can drink booze and have a topless girl in your lap to soothe your frazzled nerves.

Sapphire already has a number of package deals available for UFC 232. The basic price is $35 and includes limo transportation to the club from your hotel, reserved seating in the Showroom (which features three of the largest HD screens in Vegas), and Sapphire’s excellent buffet (think barbecue, Mexican food, mac and cheese, salads, Asian hors d’oeuvres and groaning tables full of desserts, all served at the proper temperatures by a professional catering staff). For group, party and bottle packages, check out all of Sapphire’s package deals here. Topless, full bar, 21+

Treasures will be screening UFC 232 with a buffet and half price on all drinks throughout the event. The $50 cover charge includes the entry fee and the buffet. Locals can get in for $30 if you reserve in advance at 702-257-3030. Check out Treasures VIP packages at their website. Topless, full bar, 21+

Crazy Horse III has a $50 package that includes transportation to the club, free entry, a $60 drink voucher and free pizza. Topless, full bar, 21+

I will update this list as more clubs announce screening parties.