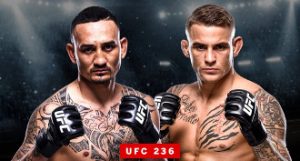 UFC 236 will be fought in the State Farm Arena in Atlanta on Saturday, April 13. If you’ll be in town to bet on the fights, I suggest you get your bets down in your favorite casino sports book, then go to one of the top Vegas strip clubs to watch the fights with access to hot topless babes for comfort when things get bloody.

Two interim championships are headlining the fight card. First, Max Holloway (20-3), who is currently the undisputed UFC Featherweight champ, will be fighting Dustin Poirier (24-5-1) for the interim UFC Lightweight Championship. It’s an interim championship because the current lightweight title holder, Khabib Nurmagomedov, got a 9-month suspension and a $500K fine for starting the brawl with Conor McGregor’s team after beating McGregor in UFC 229.

The winner of the Holloway/Poirier battle will hold the lightweight title until Khabib is allowed back into the cage, at which point Khabib will fight the winner of this match to see if he can retain his title. Personally, even though Holloway is moving up from featherweight to lightweight, I’d put my money on Holloway vs Poirier. Holloway hasn’t been beaten in a UFC fight since January 2014. But I doubt either of these fighters will prove to be a match for Nurmagomedov (27-0) coming off his win over McGregor.

The co-headline fight is an interim middleweight title bout between Kelvin Gastelum (15-3-1) and Israel Adesanya (16-0). This is an interim championship because the current middleweight champ, Robert Whitaker, suffered an “emergency medical situation” that prevents him from fighting until August. Interesting fact about Gastelum:  His record was 16-3, but was reduced to 15-3-1 when he tested positive for marijuana after a fight he won by TKO that UFC had awarded “Performance of the Night” status! (Never would have thought pot would be considered a performance enhancement drug for MMA fighters…) 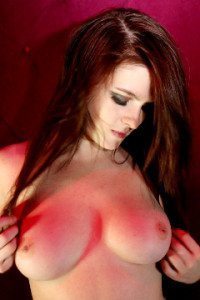 Deja Vu Showgirls in Las Vegas is always a Vegas locals’ favorite for watching UFC events. First, for a cover charge of just $20 for locals and out-of-staters alike, you get a 3-hour open bar (domestics and wells) from 6-9 pm. You will not find a better drink deal for UFC 236 in any other strip club, casino sports book or sports bar in Vegas. No other local venue even tries to match this deal.

After 9 pm, you can get free admission to Deja Vu, plus a coupon for a free drink, for arriving by the free club limo (no strings attached).

The best private-bedroom VIP dance prices of all the Vegas topless clubs are at Deja Vu. A high-mileage bedroom dance with a beautiful girl, in a room with a door you can close behind you, starts at just $150 for 15 minutes. That’s roughly what other topless clubs in Las Vegas charge for 10 minutes in the group VIP. Topless, full bar, 21+

Crazy Horse III will be screening UFC 236 with a $50 package deal that includes transportation to the club, free entry, a $60 drink voucher and free pizza. Topless, full bar, 21+

Hustler Club is advertising a screening party for UFC 236. Expect $50 entry for out of state or $40 if you take their limo (includes 2 drinks). Locals free with Vu card. Topless, full bar, 21+