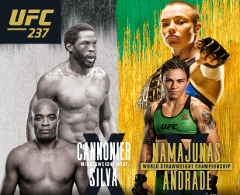 Namajunas vs Andrade and Silva vs Cannonier

The main event for UFC 237 is a girl fight for the UFC Women’s Strawweight Championship between current title holder Rose “Thug” Namajunas and Jessica Andrade. The fight takes place this Saturday night, May 11, in Rio de Janeiro, Namajunas’ home town.

But MMA fans may be more interested in the co-main event, a middleweight fight between MMA legend Anderson Silva and Jared Cannonier. Silva is 44 years old, having begun his MMA career in 1997, prior to the existence of UFC. His record in his MMA matches up to 2006 was 16-4.

Then, when Silva started fighting in UFC events in 2006, he was unbeatable for seven years, going 17-0 until Chris Weidman beat him twice in 2013, effectively ending his domination of the UFC cage.

Since then, Silva has had five fights, going 1-4 (1), somehow managing a solitary win (by unanimous decision) over Derek Brunson in 2017. (His NC decision in 2015 had been a win by decision, but was invalidated when he tested positive for steroids.) Most hardcore MMA fans know his days of dominating opponents are over and many are surprised that he’s still fighting.  It could be he’s managing to get onto fight cards only because of his legendary status. But most are also rooting for him to win, hoping to see his once fabled domination return so he can go out in some sort of glory.

Jared Cannonier is 11-4 and nine years younger than Silva, but he has lost three of his last five fights. Hard to say whether or not he’s a match for Silva. Both fighters are struggling to keep their careers alive and this will likely be either a snoozefest or one hell of a bloody battle.

As of today, Crazy Horse Three is the only Vegas strip club that has announced a screening party for UFC 237 (we’ll update this post if new info comes in from other clubs). The club’s $50 package deal includes transportation to the club, free entry, a $60 drink voucher and free pizza. Preliminary events start at 5 pm, the main event around 7 pm. Topless, full bar, 21+

If any other Vegas strip clubs announce viewing parties for this event, I will update this page accordingly.