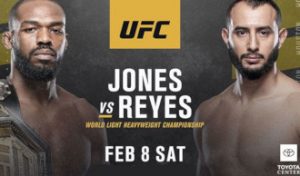 UFC Light Heavyweight Champ Jon Jones (25-1-0) will be battling it out with Dominick Reyes (12-0-0) as the main event of UFC 247 this Saturday night, February 8, in Houston, Texas. If you’re going to be in Houston at this time, ticket prices on StubHub to see the event live range from $212 to $3000.

But if you want to get some money down on the fights, come to Vegas, where the casino sports books can handle all action legally and you can view the fights on giant HD monitors with Dolby surround sound in the best Las Vegas strip clubs.

Jon Jones is a huge fan favorite so the Vegas strip clubs throwing fight parties will be packed for the event. Jones’ only loss was in 2009 when he was disqualified for illegal use of his elbow. He has never actually been beaten in the cage. He first won the Light Heavyweight Championship title in 2011, and has defended it successfully ever since.

The challenger, Dominick Reyes, is also unbeaten in his 12 bouts since 2014. This matchup with Jones is the fight he’s been working toward for five years, culminating with his KO of Chris Wiedman in October 2019.  That set him up for this shot at Jones. Both fighters are 6’4″ and 205 lbs.

So here are the Vegas strip club fight parties. I’ll update this post as more info comes in. 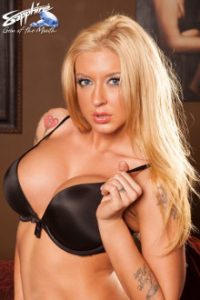 Leya is a Sapphire Gem

Although the main event generally starts between 8 and 9 pm, Sapphire‘s UFC 247 party starts with the preliminary events at 6 pm in the club’s Showroom. The Showroom has three monster HD screens the size of movie-theater screens, with Dolby surround sound.  The Showroom also features smaller HD monitors wrapped all around the room, so if you’re at the bar, the buffet tables, or anywhere else you won’t miss a single blow.

Plus, Sapphire always has plenty of their stacked lap dancers available for TLC.  Nothing goes better with violence than fine titties.

Sapphire’s basic UFC 247 party package is $35. It includes free limo transport to the club, free admission, a line pass, Showroom seating, and the club’s top-of-the-line free buffet, with drink specials throughout the fights.

For groups of six or more, generous bottle package deals are available. You can check out all of Sapphire’s UFC packages here.

Crazy Horse 3 is screening UFC 247 with free pizza, $20 beer buckets and 50% off on premium bottles throughout the fights. Their standard $50 package deal includes transport, admission, and $60 in booze. Locals free if you arrive by your own transportation (but you won’t get the $60 booze voucher). Topless, full bar, 21+