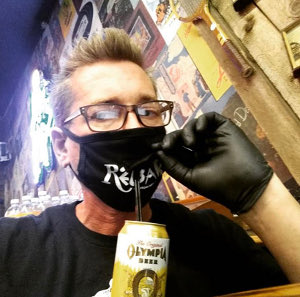 Understandably, every bar and all the strip clubs in Vegas are desperate to reopen.  Rent and mortgages and taxes are piling up while nobody’s making any money.  If the bars are forced to stay closed much longer, they will never reopen.

And the Las Vegas casinos are desperate to reopen their bars and nightclubs and shows.  Everybody understands that nobody’s coming to Las Vegas until there’s something to do besides play slots.

Now a little bar downtown called ReBar has unveiled their new “straw-sipping masks” and tweeted they’ll have a game-changing announcement coming this Sunday.  It looks like the Nevada governor’s  fake doctor “medical adviser” may be about to approve bars reopening with mandatory straw-sipping masks.

Okay, I’ll be happy if the party is getting going again.  But I have to point out how ridiculous the ScaryVirus protection theater has gotten.

Face Masks Provide No Protection, Straw-Sipping or Not

First, we already know from 22 scientific studies on using masks to stop transmission of respiratory viruses that masks don’t work. NONE of the face mask studies showed a statistically significant protective effect, and they were testing the masks in medical settings, with full N95 masks worn properly by professional medical personnel.

That’s because all masks, including N95 masks, have to allow air to pass through them or the person wearing it will die of asphyxiation.

N95 masks worn properly catch 95% of airborn particles.  That’s not enough to prevent transmission of respiratory viruses.  Lesser masks, like the face masks and bandannas everyone is actually wearing outside of hospitals, catch 2% to 40% of airborn particles if you’re wearing them perfectly, with no air gaps around your nose or cheeks or chin.  Now go to a grocery story and look closely at the mask wearers.  NO ONE is wearing his mask properly.

And every face mask, even N95 masks, has a particular particle size that it is least efficient at trapping.  Covid-19 particle size is 70 to 90 nm.  That happens to be right smack in the heart of the particle size masks are least likely to trap.  Now imagine the result from putting a hole in the mask right over your mouth to allow a straw to be inserted.

What masks do well is stop big droplets of cough spit from raining down on everyone.  What they don’t do well is stop a steady snowfall of virus particles breathed out by an infectious Bat Plague case from forming little invisible snowdrifts on table tops, counters and other surfaces.

Studies have confirmed that Chop Fluey particles can’t be aerosolized.  (I know the media tell you it can, but scientists tried hard to do it and failed. It can’t.)  The virus particles don’t hang around in the air.  They don’t form a fog.  Even in cases of “extensive environmental contamination” (i.e. patients coughing all over the place), the virus was not present in air samples obtained from the rooms of hospitalized Flu Manchu patients.

The only things you have to watch out for are 1) infectious people raining spit on you, and 2) snowdrifts of sufficient Bat Plague particles on table tops and other surfaces. 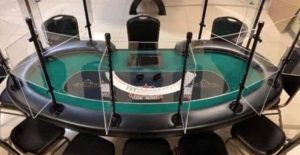 We know that WuFlu got released from its bioweapons lab in Wuhan on October 6, 2019.  Cell phone signals from that lab plummeted after that date and all traffic in the streets around the facility disappeared for a week.

7 million people a year were traveling between China and the U.S. at that time, or 583,000 people a month.  There were daily direct flights from Wuhan to San Francisco and New York City from the date of the release until Sunday, February 2, 2020, when the president’s ban on travel to and from China went into effect.  That means the virus was spreading around the U.S. for four months before the first serious countermeasure.

It wasn’t until six weeks later that the shutdowns started, and the shutdowns were never complete.  In locked-down NYC, the subways were never shut down and they were packed with “essential” workers daily.  Grocery stores and Home Depots have remained open everywhere.

So infectious Flu Manchu cases have been breathing down virus particles for months on heads of lettuce and boxes of Cheerios in a grocery store near you.  You have handled those boxes.  You have eaten that lettuce.

Yet the percentage of hospitalized (or even symptomatic) cases has remained very low.  That’s because a light sprinkle of virus particles just doesn’t cut it to make you sick.  It takes a good concentrated helping of virus particles to trigger Sino Snot Storm.

So what does the Nevada governor and his fake doctor medical advisor require for casinos to reopen?  Gaming tables with Plexiglas screens around each seat to help concentrate the virus particle exhalations of any infectious person who happens to be at the table.

Imagine a guy, let’s call him Willie, who owns a garment sweatshop in the fashion district in L.A. The garment sweatshop operates at a small loss, but that doesn’t matter because Willie’s real job is laundering money for a Mexican drug cartel.  You’ll see a lot of these guys at the high-stakes blackjack tables in Las Vegas.

The Vegas casinos have been shut down for two months and Willie now has multiple Hefty bags of hundred dollar bills to launder.  Perhaps he is a VIP player at Wynn, specially invited to be there for the casino’s May 26 reopening.  He books his room.

He feels fine as he leaves L.A. and as he checks into the hotel the evening of May 26.  But once he gets to his room he starts to feel a little woozy.  He orders from room service, helps himself to the complimentary room bar, and hits the sack early.  Those cool, high-thread-count cotton sheets sure do feel good.

The next morning he wakes up feeling like he has a cold.  He coughs as he’s bundling up the bills from his Hefty bag.  He feels a bit warm.  But he still has money to launder, so he chugs down a good bit of Dayquil, fills his pocket flask with it, and heads down to a blackjack table.

The Dayquil has lowered his temperature enough that he gets through the temperature checks without a problem.  (We know aspirin works, because people used it to get onto flights out of Wuhan after temperature checks started.)  He pulls out his roll of freshly coughed-on bills and passes them under the Plexiglas screen to the dealer.  The dealer counts and stacks the contaminated bills, converts them into chips, then scratches her nose through her face mask.  Some China Cooties get through, but probably not enough to make her sick.  Yet.

The dealer also hands Willie a face mask with her freshly-contaminated hands.  He puts it on loosely, cursing, and starts inhaling more of his own virus particles, a helpful way of increasing his chances of getting really sick. Two other guys arrive at the table, sit down in their Plexiglas booths, and buy in.  The dealer passes them chips with her freshly-contaminated hands.

In his Plexiglas booth, Willie is exhaling a steady snow storm of virus particles down onto his hands, his chips and the table edge.  Normally they would dissipate on the moving air to spread out too thinly around the casino to make a difference to anyone else.  But the casino’s Plexiglas virus collectors are helping greatly to concentrate them.

Willie’s drink arrives and he lifts his mask to sip it and take another hit on the Dayquil in his flask.  A fresh blizzard of virus particles from his virus collector mask float down on his chips.  He takes a chip on top and gives it to the waitress.  He takes some more freshly-snowed-on chips on top of his stack to put out for his blackjack bet.  The dealer deals, Willie gets a 17, the dealer gets a 19, the guys sitting to the left of Willie both get 20s.  The dealer collects Bill’s contaminated chips and pays them to the guys on the left.

A guy to the left pulls some of the freshly-contaminated chips from the table because of the rules of his system.  Willie grabs freshly snowed-on chips from the top of his stack and puts them in his betting spot.  After a few more hands, Willie is forced to dig into his roll of coughed-on bills to buy more chips.  But he keeps on playing; he has a job to do.  He doesn’t leave that table for four hours, when the Dayquil in his flask finally runs out, and neither do the guys to the left of him, who’ve been winning all his chips.

When the guys leave the table, they color up and are quickly replaced by three new guys putting out cash to buy in.  The dealer exchanges the cash for the chips left by Willie and his two new friends.