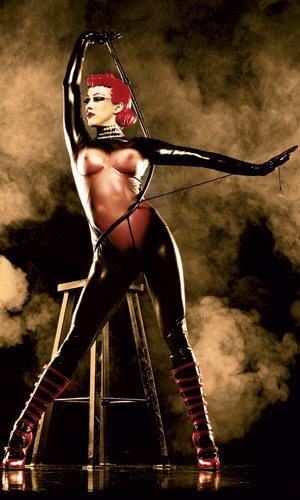 So Many Ways to See Women Undressed

Let’s say you decide not to spend your every waking Vegas moment getting fleeced in either a casino or a strip club. You decide to branch out in your quest for entertainment. You’ve hit that point where you know if you’re in a strip club, you’re going to start shelling out twenties and you don’t want to blow all your mad money yet. You don’t want to be tempted by lap dancers—you know you can’t resist—but is it possible to see tits without having to tip dancers?

Buddy, you are in luck, because you are in Vegas, Tit Capital of the Western Hemisphere. 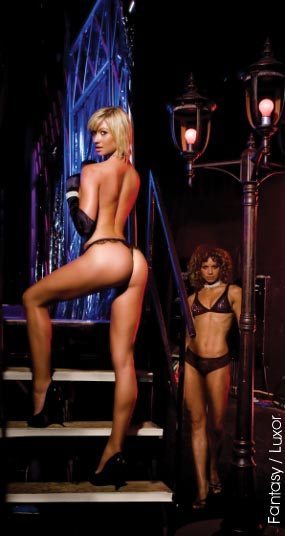 Some of the topless casino shows are pretty damn sexy and the casino showrooms do not allow lap dancing. Plus, nobody tips the dancers in a casino showroom. The price of admission is all you need pay and drinks are always available.

Many shows in Las Vegas are billed as “adults only,” but these are mostly comedy/variety performances. I don’t review Brad Garrett’s Comedy Club at MGM Grand, or Menopause: The Musical at Luxor, or The Rat Pack is Back at the Rio or any of the dozens of other adult-entertainment options this town has to offer that wouldn’t fill the bill for a guy who’s seeking something that’s gonna produce wood. If a casino show has no dancers (or other suitable females) taking their clothes off, don’t look for my review.

I’m not going to review casino shows from the perspective of theatrical brilliance or gripping plot or special effects or any other common criteria you might find in the local papers or travel guides. I judge casino shows primarily by how much you get to see nearly naked dancers that can do splits and back-bends in high heels and g-strings and who the fuck cares what the plot is?

Ever since the “family-entertainment” scare of the 1990s, when casinos canned most of their topless shows in favor of amusements for the baby boomers with kiddies, the casinos have been losing entertainment dollars to the strip clubs. Now, the casinos are fighting to get these revenues back. To keep their customers on property, they’re offering a new assortment of topless revues, advertised as delivering some pretty steamy entertainment.

Bear in mind that all topless casino shows are not created equal. For example, both Jubilee! at Bally’s and X Burlesque at the Flamingo feature topless dancers.  Jubilee! has a cast of 100 and some of the most astonishing special effects you’ll ever see in a stage production. If I were rating shows on production values, X Burlesque wouldn’t even be in the same league as Jubilee!

But in my rating system, special effects don’t count. The six female dancers who comprise the entire cast of X Burlesque are so much sexier and spend so much more time on stage in little more than g-strings and heels than the 50 Jubilee! showgirls that X Burlesque beats Jubilee! hands down for any guy looking for something resembling a strip-club experience in a casino showroom. 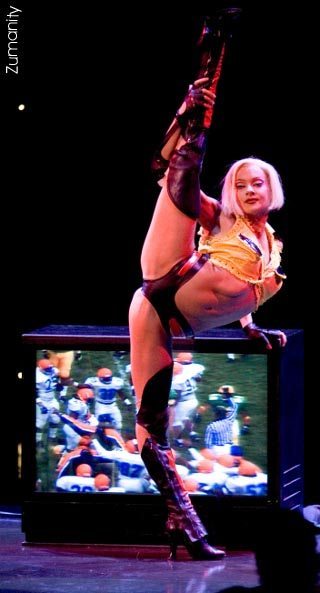 Let me explain what I mean by “something resembling a strip-club experience in a casino showroom.” If you’re a tourist looking for a more risqué Vegas show where you get to see some beautiful nearly-naked dancers, you’ll enjoy a show like X Burlesque. But if you’re a guy who likes watching strippers and you think X Burlesque might provide an actual strip-club experience, you’ll likely be disappointed, even though X Burlesque is one of the sexier casino shows in town.

In the 1980s, Tina Turner recorded a popular song called “Private Dancer,” the lament of a woman who worked as a stripper. The lyrics described her feelings while dancing and included lines like, “You don’t look at their faces” and “You keep your eyes on the wall.” It’s the lament of a woman who stripped out of desperation, who felt shame for having sunk so low—a dancer who had no feeling for her dancing as an art form, but only as a source of survival in misery and isolation. You will sometimes see dancers in strip clubs who could be singing that song. But they rarely last long in the business. 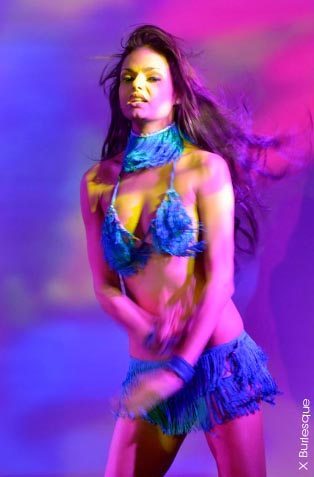 The whole art of stripping is about eye contact with the audience. This was always true even in the old days of burlesque, but it’s especially true in the age of lap-dancing, when personal contact is precisely how the money is made.

A stripper makes individual guys watching her feel like she’s dancing for them alone, and she does it with her eyes. She’s a girl flirting with her clothes off. As a popular art form, stripping has been driving men wild since Salome danced for King Herod. If you watch the same stripper on 10 different occasions, her routine will be different every time. It all depends on which guys she picks out to tease and how she proceeds based on each guy’s responses to her. There’s always a playfulness and spontaneity to stripping and the stripper’s creativity and improvisations make her exciting to watch.

A stripper on stage is always living in the moment and you never know what she’s going to do next. The best strippers have fun on stage and you can’t fake having fun. It’s not the bare boobs that make a stripper exciting so much as the lively, intelligent, teasing woman behind them.

I had a great seat for X Burlesque, right on the center aisle, three feet from the mini-stage. During the course of the show, every dancer had a turn or two on that stage, but not once did one of them look at me. The X Burlesque dancers do a lot of the classic stripper moves and they do them very well, but there isn’t an improvised moment in the show. The overall effect is rehearsed rather than spontaneous. Also, if I had put a tip on that mini-stage, even a twenty, the dancer would likely have been insulted, not complimented. Even if she’s swinging topless on a pole in naught but a g-string, she’s not a stripper, she’s a showgirl.

Still, I like casino shows. In fact, I love casino shows. You can’t see shows like Vegas shows anywhere else but Vegas. Plus you could take your wife or girlfriend to any casino show I review without making her feel uncomfortable, even though they feature topless dancers. (I’m assuming your wife or girlfriend isn’t a total prude.) So if you’re in Vegas with your significant other and you can’t get away to a strip club, these shows might be your next best bet. A few of the shows I’d recommend to any strip club devotee just to see the bodies on the dancers. Gorgeous naked dancers? What’s not to like? 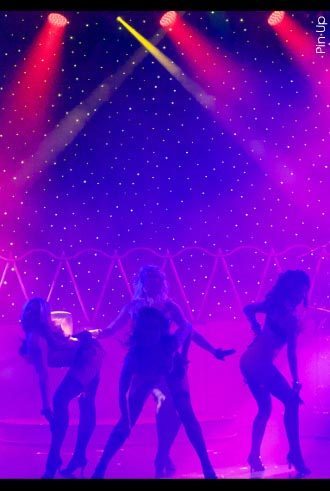 But no matter what a critic may say in a review about a casino show, no matter how much he raves about how “over the top” he found it, trust me, in most cases he’s just trying to maintain the ad revenue stream for whatever publication he works for. No one with any concept of what goes on in the strip clubs would ever view casino production shows as highly erotic. The dancers in casino shows can dance—in most cases a hell of a lot better than most strippers—but when it comes to pole and floor work and the stripper moves that make the boys go nuts with lust, most Vegas showgirls could take lessons from the 18-year-olds over at Little Darlings.

How to Get Better Seats for Less at Vegas Topless Shows

Most of the casino shows I review have a minimum-age requirement of either 18 or 21. These shows are generally expensive, with ticket prices ranging from $35 to $100+. Locals are often given a price break, so if you’ve got Nevada ID it’s always smart to ask at the box office. Guests of the hotel-casino are also sometimes given a special rate. Be sure to check in-room extras, or even look for packages that include show tickets when you’re searching out a hotel in the first place.

Casino shows are sometimes promoted through discount coupons distributed through local motels, rental-car offices, visitor centers, or in the freebie visitor magazines, and even if you don’t have a coupon, the box-office cashier may be able to supply you with one. A good thing to remember in Vegas is that there’s often a discount available on anything the casinos have to offer, so always ask. And, of course, this will be an area we pay close attention to on Twitter @ToplessVegas.

One way to get into a show free is to gamble in the casino. Showroom comps are among the easier freebies for gamblers at the table games to obtain. Unfortunately, this usually requires bets of $25 or more, sometimes for a number of hours, and this could make the cost of the show far more expensive than just buying a ticket. If you do play table games at this level, or if you play high-end slots or video poker, you’ll often find that you can get show tickets comped just by asking your host.

My general approach to tickets for casino shows with assigned seating is to buy the cheap seats, then tip the maître d’ or usher for a better seat. This usually works when the show isn’t sold out. In my reviews of the shows, I tell you which shows are your best bets for this ploy.

The show prices I quote in my reviews are the full prices you’d pay at the casino showroom box office, online at the casino’s website, or over the phone, though there may be additional fees.

I rate the casino shows according to the same SPW scale I use to rate strip clubs, with 100% being the most arousing and 0% being about as sexy as Spongebob Squarepants. (SPW stands for “Statistical Probability of Wood.” For a full explanation of the scale, see my Guide to Strip Club Ratings.)

Here’s a quick rundown of the show ratings from top to bottom on the SPW Scale:

The burlesque renaissance, sometimes called the neo-burlesque movement, is alive and well in Las Vegas, even though we do not have a full-time neo-burlesque venue yet. All of the current neo-burlesque shows take place in bars and nightclubs on specified nights, some monthly, some weekly, some a couple nights a week.

A few of the casino shows, like X Burlesque and Zombie Burlesque, are choreographed production shows, a far cry from the typical (more improvisational) neo-burlesque shows. So they’re listed above under topless casino shows.

All of the topless casino shows, in fact, could be loosely categorized under burlesque, as all of these shows grew out of the old Vegas burlesque shows. The first topless show in Vegas was Minsky’s Follies, a traditional 1950s burlesque show with strippers and comedians that opened at the Dunes in 1958. Since then, the casino shows have simply gotten more elaborate, but they really are nothing more than what burlesque turned into in Vegas.

The bar shows are generally free or a low cover charge. Some of these shows are pretty wild. Most have a roughly equal male/female customer ratio, but offer some kind of entertainment where you might expect to see female performers (sometimes customers) in skimpy outfits or some state of undress. Most of these shows don’t last very long or have lots of break time in between acts, but some are a lot of fun and worth going to anyway.