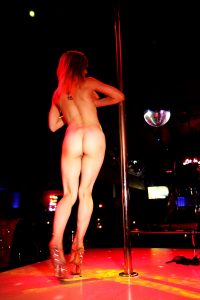 The club’s Director of Operations, Ryan Carlson, has put out a statement saying, “America is a free country, and strippers will continue to be a part of the fabric of American life.”

There are also reports there will be a drive-through strip show available at the club starting Friday, March 20, but when I phoned the club to ask about it I was told they were still working out the details.  So I suspect this may be something of a whopper.

It’s still spring break, and the Las Vegas strip clubs had remained busy through last night. Little Darlings is likely to get a good crowd for their hot, fully-nude stage show.  Think a squad of college cheerleaders dancing their way out of their bikinis.

We commend Little Darlings Vegas for standing up for American freedom and the essential nature of Las Vegas strip clubs.  Nude, no alcohol, 18+

Nevada Governor Sisolak is now calling his shutdown order mandatory for non-essential businesses and has empowered local governments to fine or revoke licenses of businesses that stay open.  The new order goes into effect at midnight, March 20.

But Las Vegas Mayor Goodman has publicly opposed Sisolak’s closure order and the state will not be imposing penalties directly.  Here’s hoping Goodman, a libertarian, defies the order.

Our extraordinary Las Vegas Mayor Caroline Goodman and City Attorney Brad Jerbic have told Governor Sisolak to stuff it.  They announced Friday afternoon that they will not prosecute businesses that defy Gov. Steve Sisolak’s shutdown mandate “because the order is unconstitutionally vague.”

That’s because it’s impossible to determine the difference between an “essential” and “non-essential” business.

But Clark County, in which Las Vegas is located, is threatening $1000 daily fines and revocation of business licenses to any businesses that defy the order.  Every single one of the seven Clark County Commissioners, like Sisolak, is a Democrat.  When your livelihood is destroyed by a prolonged shutdown, Las Vegans, remember that.