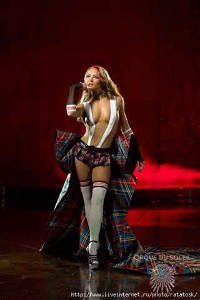 If you go to zumanityhoops.com, you’ll find an online game called “Zumanity Hoops,” in which you get to try to undress the delectable Julia Kolosova. Julia starts out wearing a sexy schoolgirl outfit—a plaid miniskirt, over-the-knee white stockings, and a top that looks more like a bra than a blouse. While Julia adopts sexy poses and spins multiple chrome hula hoops, you can undress her by following a gold ball with your cursor.

Try to keep your eyes on that damn ball while Julia’s spreading her legs in those little white panties. If you can actually get Julia’s bra off, you’re a better man than I am!

Then again, play this game for a few minutes and tell me you don’t want to see Julia do this act live while dangling from the ceiling on ropes! For my money, the breathtaking gymnast/aerialist Julia Kolosova is the highlight of Cirque du Soleil’s Zumanity.

But any strip-club devotee will find a half-dozen performances that make this production well worth the price of admission. One of the early numbers is a kind of high-speed jungle dance performed solo by a black female dancer to primitive percussion sounds. The two dancer/gymnasts who perform topless in an oversize goldfish bowl are also incredibly sexy.

There are also several sexy male-female ballet-type dances with varying themes, including a bathtub number with gymnast Vanessa Convery. If you like watching gorgeous naked women, you’d be making a big mistake if you passed on this show. The price is high, but it’s definitely one-of-a-kind.

Surprise! Zumanity is Funny Too! 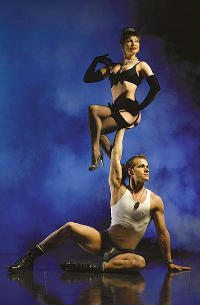 I was surprised at how funny Zumanity is. My previous experience with Cirque du Soleil shows is limited to Mystère and O, neither of which would be labeled comedies in anybody’s book. This show also has a cabaret feel to it, as a result of the live band, singers, and the comic performers who appear throughout.

The new MC is a tall slim drag queen who introduces herself as “Edie, the Mistress of Sexuality,” though the comedy duo of Nicky Dewhurst and Shannon Calcutt, who specialize in audience-participation humor with a lot of improv, spend just as much time on stage bantering with the crowd. They’re very funny. Dewhurst is a skinny guy in a bad-fitting peagreen tux with a sleazy leer. Calcutt is scrawny and goofy-looking in an outfit reminiscent of a 1950s’ high-school prom dress with lots of petticoats. She has a voice that could cut glass. Her bit on how flat girls can improvise a boob job with scotch filled baggies is truly demented.

Then there are the Botero Sisters, identical twins who are quite a few pounds beyond zaftig. Think hippos in tutus. Appearing first dressed as sexy French maids and subsequently in various skimpy lingerie ensembles, these girls are downright fat and proud of it. If you have the nerve to sit up front, you may find one of them in your lap or smothering you in her titties (hey—the only casino show in Vegas with lap dancing!), or simply feeding you strawberries from a silver tray. Later in the show they do a pom-pom dance with two other performers, in which all appear to be naked while sporting fake genitals. Zumanity has more than one bizarre moment, but it’s all so silly you can’t help laughing out loud. 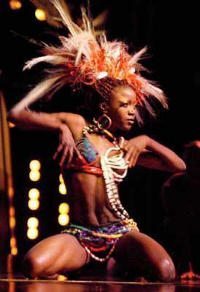 The Zumanity Theatre is large (seating 1,256), with a big stage that juts into the center of the high-ceilinged room. It’s an excellent design for this show; there really aren’t any bad seats. Even the balcony seats are steeply tiered so that everyone has a good view of the stage. This is definitely a show that you’d like an up-front seat for, but don’t sit up front if you don’t want to risk being a part of the production. Even if you’re not right up front, cast members go through the audience at times picking victims for various weird comedy skits.

No drinks are served in the theater, but you can bring one in with you. Full bars in both the lobby and balcony serve domestic beer for $6. It’s a 90-minute show, so I’d suggest getting a drink or two.

Warning: You’ll have to sit through a number of acts that may not be your cup of beer if it’s really just the hot babes you’re interested in. Such acts include a male striptease number and a double-jointed male contortionist who comes out in boxer shorts and socks with old-fashioned sock garters and proceeds to tie himself in knots. Then there’s the muscle-bound midget acrobat/aerialist and the musclebound gigolo and the musclebound black dude with satyr’s horns who walks on all fours. But all in all, even if you just go for the babes, you won’t be disappointed.