This show’s a nail-biter—scary, scary, dangerous stunts done live in a small space where everyone’s close to the stage. The deliberately rinky-dink atmosphere of the whole production is one of the factors that increases the feeling of danger. The show takes place in a tent that’s set up outside Caesars’ in the casino’s Roman Plaza. Once inside the tent, the space is unlike any other 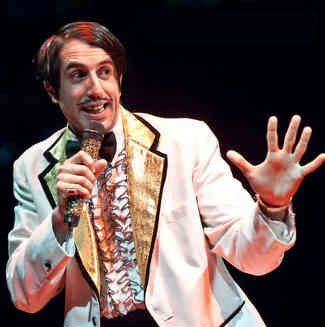 Vegas show I’ve been to. It resembles the inside of a cluttered garage.

The seats are all wooden folding chairs. It’s dark and raw, with lights on strings and poles and scaffolding, and all kinds of crap hanging from the tent walls—hubcaps, road signs, old mirrors, bird houses, windmills. The small stage is a raised wooden platform dead-center in the room. It all looks so cheap and tawdry.

It’s in this setting that the performers—a brilliant series of acrobats and skaters and jugglers and balancing acts and aerialists and other circus types—carry out a stream of daredevil stunts with so many “close calls” that it’s truly harrowing to watch some of the routines.  Throughout the show, you’ll hear genuine gasps in the audience.  It’s like a nightmare-version of a circus, one that threatens to spin out of control any minute.

And let’s meet Absinthe’s dark vision of proper circus MCs—the Gazillionaire and his female co-host, the flaming-haired Penny Pibbets. The Gazillionaire looks like a slimy snake-oil salesman, with crooked teeth, a pencil-thin mustache, a bad haircut, and an ill-fitting tux. He’s got a voice like a buzz-saw and his staccato patter is peppered with more expletives than you’d hear in a biker bar on a Saturday night. 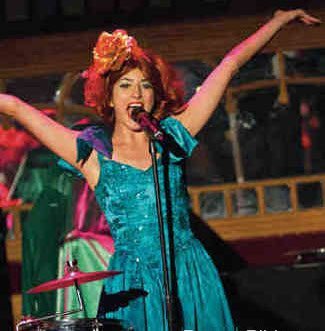 Penny appears to be a sweet young thing in a turquoise satin prom dress. But the XXX-rated fantasies she describes in her squeaky screechy voice make her the perfect hostess for this circus of the Id. The unbelievable amount of filth that spews from the mouths of these two is so over-the-top that I’m sure many in the audience would be shocked if there was even a second’s break in the laughter. I’ve never seen a Vegas show risk so much.

These are edgy, beautifully performed, and absolutely original stand-up routines, way out on the frontier of modern social satire (especially Vegas satire). Many comics in the past have been busted for acts far milder than the Gazillionaire and Penny.  On the riskometer, I’d put this whole show at about 9.8 on a scale of 10. The Gazillionaire is at 9.9 on the riskometer. Penny? She’s a 10.

In addition to the MCs and daredevil acts, Absinthe features a torch singer called Melody Sweets who does a few songs. She also takes her clothes off and both her voice and her body are worth the price of admission. She strips to G-string and pasties. (There are pasties in all the topless numbers in the show. No nipples on display.)

There’s also a comedy ballet duo who are side-splittingly funny. The scrawny guy with way too much body hair would be a dead ringer for Frank Zappa if he’d let a tuft grow beneath his lower lip. They’re delectably awkward in everything they do—she accidentally kicks him in the nuts; he sits on her face …

Absinthe is one of the best shows in Vegas right now. I’ve heard it compared to Cirque du Soleil’s “Zumanity,” but that doesn’t do it justice.  The circus acts are as good, but it’s way more intelligent.  The satire is so sharp I can imagine the show at an art house in New York.

Yet the show manages to keep Vegas audiences from walking out.  Now that’s a balancing act. 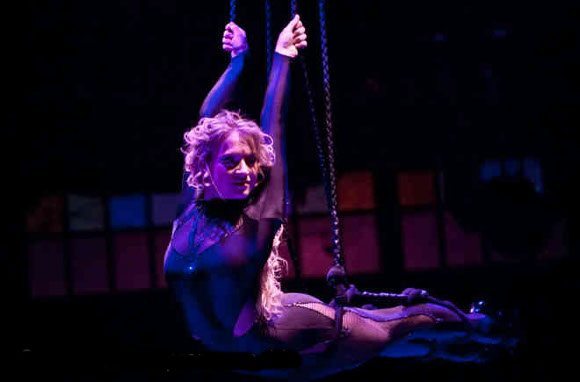 The whole show lasts about an hour-and-a-half. The crowd gave a standing ovation at the end, well-earned. I will definitely go see this one again, and this is where I take my friends when they come to town. The SPW rating isn’t all that high, but you won’t be disappointed if you go to this show just to have a good time.