I never thought I’d see a stripper twirling her tassels to Woody Guthrie’s “This Land Is Your Land,” but we were primed with booze enough to sing along. I ordered another Heineken and followed the bouncing boobs—”This land was made for you and me!”

Welcome to Burlesque Roulette, a revue that takes place on the second Sunday of each month. The first half of this show is a “regular” burlesque revue, with each of six dancers doing a striptease in turn. But for the second half, each dancer spins a wheel and whatever number the pointer lands on determines the song the dancer has to strip to. I don’t know who picks the songs assigned to each number, but somehow Woody Guthrie got shuffled into the mix and Ophelia Pearl, a BBW who’d stripped down to corset and pasties to a James Brown song for her first number, got Woody for her second. She handled Woody like a pro. 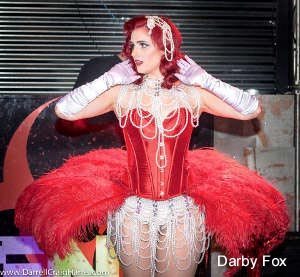 The February show was MC’d by Miranda Glamour. Other performers on the bill included Roxy Rouge, Flora Fatale, Penny Piper, Katerina Nicole, and Darby Fox. Darby Fox is a total fox. Here’s a pic from the show that I lifted from the Burlesque Roulette Facebook page.

Katerina Nicole is more of a singer than a stripper. She sang for both of her numbers, but never got topless. I admit she has a great voice, but she’s a knockout and you’ll definitely want to see her strip. She wore a kimono and took it off at the end to reveal a corset. The performers change every month. The Feb show was a fundraiser for Pinups for Patriots.

With no cover charge and cheap beer, this show is an enjoyable way to spend an inexpensive Sunday night in Vegas.