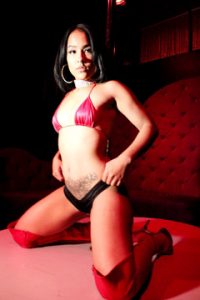 Deja Vu Showgirls is one of the smaller high-mileage topless clubs in Vegas. Where Deja Vu stands out is in offering a private room experience cheaper than you can find at any other topless club in town.

The private rooms are furnished with a sofa or full-sized bed to stretch out on and a real door you can close behind you.  The rooms’ walls are partitions that run from a couple of feet off the floor to roughly 6 feet.

There is a drink requirement for private room shows.

If you’ve never had a real private-room dance, it’s an experience worth treating yourself to.  Imagine being completely alone with the girl who’s undressing for you instead of with a bunch of guys in the group VIP.