Fantasy has nine dancers, all of them gorgeous and topless throughout much of the show. Get a seat up front. You won’t regret it.

Fantasy puts a lot of focus on the dancers. In the first number, three dancers strip out of their bedroom lingerie and frolic topless on a bed to the old Vanity 6 hit, “Nasty Girl.” You may recall that Vanity 6 was the lingerie-clad girl group put together by Prince in the early 1980s. I always liked “Nasty Girl” and the bed scene in Fantasy is like a Roger Vadim-inspired pajama party. There’s a lot of business with leap-frogging and girl tumbling and sliding under the sheets together.

There’s a feather dance to Queen’s “Body Language.” Another standout is a sizzling striptease by a dancer introduced as Tracy to a great old Peggy Lee song “Why Don’t You do Right.” When I was a kid I had a crush on Peggy Lee. My father had some of her LPs. I think most people think of “Fever” when they think of Peggy Lee. But she sang so many songs with great lyrics. “Why don’t you do right, like some other men do? Get out of here and get me some money too.”

Basically, this is a show where you watch eight dancers in tremendous physical condition in various types of sparkling underwear get topless and dance around to good music. I love this show.

In the fall, when I heard Fantasy was going to lose its lead singer, Lorena Peril, I wondered how they would ever replace her. Peril has such a powerful voice and she truly dominated the stage whenever she was on. But somehow the show found the only other female singer in Vegas with a voice that could compete with Peril–Jaime Lynch, who formerly sang with the Pussycat Dolls (when they were at Caesars).

Just to make sure no one would doubt her capability of replacing Lorena Peril, Lynch’s opening number was a cover of Alicia Keys’ “This Girl is on Fire.” Wow. That’s all. Wow. She’s definitely got the voice for it. She does a few of the same numbers that Peril used to do, most notably “This Is a Man’s World,” with a pole dancer providing some nice visuals. And she belts out “Roxanne,” accompanied by four dancers. But she also does a few new numbers. After the Fantasy cowgirls rip through Jesse James’ “New Blue Jeans,” Lynch hits us with a raucus version of Gretchen Wilson’s “All Jacked Up.” One of the weirdest numbers she does is Beyonce’s “Put a Ring on It”—weird because comedian Sean E. Cooper, in drag, joins the Fantasy dancers. 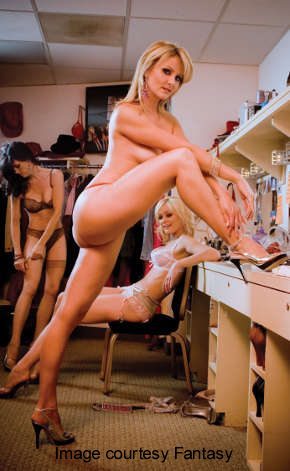 Singer/dancer/comedian/impersonator Sean E. Cooper has been with the show for eons. Cooper’s a laugh riot and in this latest version of Fantasy, he spends more time improvising off his back-and-forth exchanges with the audience than in previous versions.

It’s fun to watch him work without a net. He’s one of those screwball comics who can say anything, no matter how risque, dirty, or even obscene, without ever offending anyone because he’s just so damn funny.

He also does hilarious impersonations, notably in this show of James Brown and Michael Jackson. I’m not sure if he changes his act from show-to-show, as he easily has enough material from past versions of Fantasy to headline a showroom on his own. As I was leaving the theater at the end of the show, I found myself wishing he would have done his Tina Turner and his Sammy Davis Jr. as well as his long bit about rap music invading other cultures—his vision of a Bollywood movie with the Indians rapping makes me laugh every time I think of it.

But this is, after all, a show that features topless dancers and that’s why we’re here. Singers? Boo! Comedians? Bah! We want breasts! And Fantasy delivers.

The Atrium Showroom is a classic theater with a proscenium stage and standard tiered seating. It was designed for production shows, not intimacy, and Fantasy is ultimately a production show. But the stage is not large and the best seats really are those closest to the stage, front row if possible. No drinks are served inside the theater but you may bring one from the bar outside, provided you pour it into a plastic cup that you can get at the entrance.

Ticket prices range from about $50 to $70, depending on where and how you get them, with the higher prices for seats closer to the stage. All seats are assigned and a tip to the usher may not get you a better seat, because the good seats often sell out. Special discount tickets are often available for locals, so if you’re a Nevada resident, ask. Most recently, the locals deal has been two tickets for the price of one, and it’s good for all levels, not just the cheap seats.

One Response to “Fantasy – Review”