Las Vegas Cowgirls in Their BVDs 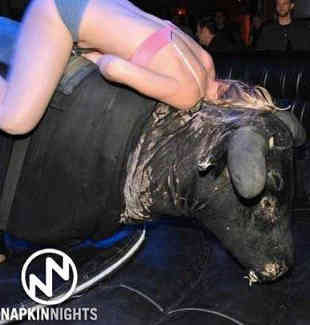 The MC introduces the girls one at a time and each girl starts by stripping down to her definition of bikini. Sometimes it’s a real bikini, sometimes it’s her underwear.

At this time, he explains rule number one—no flashing your boobs or you will be disqualified. This elicits some boos and hisses from the crowd, as might be expected. Then he qualifies that rule by stating that if a booby should accidentally expose itself as a result of the bull’s rocking, well, what the hell, accidents happen. The crowd is once again hopeful.

There are three sets and each contestant has to ride the bull once in each set. The first set is slow and sexy. The bull does not buck or spin, The guy on the controls keeps that beast as calm as granny’s rocker, just a little up and down, back and forth. In this set, the girls just pose and try to show their style.

For the second set, the guy at the controls slowly increases the difficulty level of the ride, from level 2 up to level 7. Up around 6 or 7 is where the titties start popping. If you’re sitting up front, watch the guy on the controls. This guy is an absolute master at removing breasts from bra cups. Just by bucking and spinning that bull with precision timing he keeps the girl on the bull despite the dislodging of her titties. How does he do it? I can’t get tits out of a bra using my two hands. He does it with an X-Box joystick.

When girls get thrown you’ll see lots of awkward postures, but very forgivable, since it’s mostly cute young girls in their underwear. For the third and final set, the difficulty levels go from 4 to 10, though most contestants will have flown off the bull long before they get to level 10.

The whole show takes a couple hours, since there’s a half-hour break between sets and each set takes 20-30 minutes, depending on the number of contestants. At the end of the competition, the winner is decided by audience applause and gets the prize money.

This is definitely one of the best amateur shows in Vegas, though it helps if you like shit-kickin’ country music and beer, since there’s lots of down time to kill during that two-hour period.

[Thanks to DJ Caffine for the photo from his fb page]