I gotta be honest. As I hadn’t heard that Jubilee had changed since 2009, I hadn’t seen it since then. I had no reason to update my review. The fact is even the cheap seats to this show are over $60, and the way I think of it, $60 is three lap dances. When I consider the raw entertainment value of three lap dances versus Jubilee … I think most men would agree it’s no contest. To sum up Jubilee succinctly: There’re a hundred nipples on the stage and not a woody in the house. Those tits come and go so fast, you’ll hardly notice them. 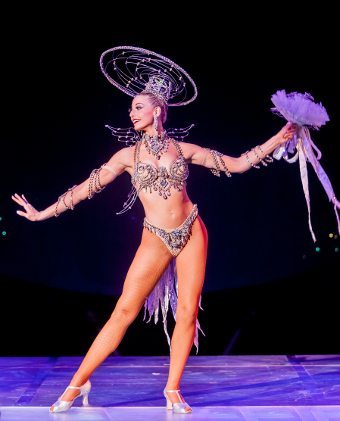 But now, in March of 2014, Jubilee has just come off a two-month hiatus, as the show’s creative team has been upgrading the choreography, costumes, music, dancing, cast, and special effects.

Where do I start? The beginning? How about a spotlight on a pole dancer on a pole that’s higher than the ceiling of any strip club in town? Is it a 30-foot pole? 40-foot? 50? Wait a minute … A pole dancer? In Jubilee?

The new music is a major change. It was so corny and schmaltzy before, all that early 20th century, pre-rock music. “Pack Up Your Troubles in Your Old Kit Bag.” “Tea for Two.” Hoagy Carmichael. Rodgers and Hammerstein. The whole Fred-Astaire/Ginger-Rogers tribute scene has been cut—a scene that was chock-full of corny old music.

The beats in the new version range from Timberlake’s “Take Back the Night,” to the Beach Boys, to classic show tunes like “Hundreds of Girls” and “Maria,” to the Temptations’ “The Way You Do the Things You Do,” to Ray Charles’ “You Don’t Know Me,” to McCartney’s “Yesterday,” to Jackson 5’s “Show You the Way to Go.”

The dancers also get to dance more in this version and that’s a huge plus. The dancing is more modern, the costumes more modern, sometimes even edgy. The pas de deux in stylized tux and gown to John Legend’s soulful “This Time I Want It All” is sexy as hell. The new lighting and projection effects are way cool.

The lingerie fashion show (Dolly’s Follies) still takes place on the Titanic, and before the boat sinks we get to meet the snooty upper-crust snobs at the Captain’s Ball. As with the old version of the show, you shouldn’t try to make too much sense of it. Somehow Samson pulls down the temple pillars, which leads to the sinking of the Titanic, which leads to 22 disembodied pairs of tap dancing legs. Very cool, but wtf?

Also deleted from the 2014 show are the side acts—the juggler, the hand-balancers. The show flows better now despite its senselessness.

The grand finale with all those showgirls in their crazy art-deco headdresses is an only-in-Vegas spectacle that anyone who comes to this town has to see at least once.

Donn Arden was a legendary Vegas showman who first hit the scene in 1958 with his racy (at the time) topless review, Lido de Paris, at the now-demolished Stardust Casino. Jubilee is Arden’s ultimate Las Vegas production show, and despite its modern upgrade this show remains an anachronism. There’s a cast of 100 performers, half of them showgirls who perform topless on and off throughout the extravaganza, so if you’ve never seen a classic Vegas show and you have any interest whatsoever in the history of Las Vegas entertainment and the types of shows that initially gave Vegas its “anything-goes” reputation, it might be worth giving up a few lap dances to catch this one.