Hooters’ Night Owl Theater is the perfect intimate venue for a show like this. The room might seat 100-150 max, mostly flat floor seating in straight-back chairs. The back area by the bar is raised. Because the room is small, there aren’t really any bad seats.  [Note:  Little Miss Nasty has moved to the 172 theater at The Rio Casino Hotel.] 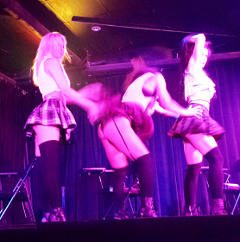 The whole show is done by four dancers. No comic or magician. It lasts about an hour and twenty minutes with a ten minute intermission. 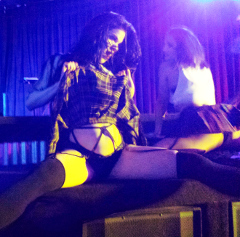 I love the soundtrack. As soon as I heard Depeche Mode’s “Personal Jesus” as the show opened, I knew this would be different from other Vegas shows. The nasty girls are obvious fans of Marilyn Manson, another artist not heard much in Vegas shows. Manson’s “The Beautiful People” kicks off the fun, followed shortly after with Manson’s plaintive cover of the Eurythmics’ “Sweet Dreams (Are Made of This),” accompanied appropriately enough by two dancers in a lesbo-bondage number. Manson’s “We’re All Stars Now in the Dope Show” is also featured in the first half.

All the dancers wear mismatched skimpy black lingerie with ripped stockings throughout the first half of the show. Other musical treats in the first half of the show: Rob Zombie’s “Mars Needs Women,” Pantera’s “Are You Talking to Me?” Korn’s “I’m Coming Undone,” and Nine Inch Nails’ “You Let Me Violate You.” Props include such items as leather jackets, gas masks, a strap hanging from the ceiling they could swing on and a pole setup on stage for general mayhem.

At some point the dancers ditched their schoolgirl skirts for daisy dukes to act even sluttier to the Stooges’ “I Wanna Be Your Dog,” Led Zeppelin’s “Black Dog,” Gina & the Eastern Block’s “Sippin’ on a Forty,” and they wrapped up the whole show with Rage Against the Machine’s “Do What They Told You.”

One unusual feature: Audience members are encouraged to take pics of the performers during the show because they’re hoping you’ll post them on social media. The pics in this post are courtesy of my Android.

You can get tickets through the Little Miss Nasty official website here.