[THIS SHOW IS NOW CLOSED.]

I knew I was going to like this show the moment I walked into the Stratosphere Theater and heard the Brian Setzer Orchestra’s Jump, Jive and Wail CD as background music for the seating and drink ordering portion of the show.

There’s no storyline to Pin Up, just a premise, that premise being the reproduction of a 1940s-50s era pin-up calendar, month by month, through dance, music, and song. With Playboy’s 2011 Playmate of the Year, Claire Sinclair, as the featured star, you might expect this to be a topless revue. But it’s not. All dancers and Claire herself remain covered (barely) top and bottom throughout.

But I’m not complaining. Claire Sinclair is a major bombshell, adorably cute beyond words with her Betty Page bangs and cherubic smile and bubbly personality and skin so white that all she has to do is bare her midriff and she looks twice as naked as she is.

This show won’t satisfy any guy looking for strip club entertainment, but if you’re any kind of a lingerie fetishist, and especially if you love the old pin-up calendars of the 40s and 50s (this is where I start howling like a wolf), you’ll like this show. Pin Up is sexier and more entertaining than a lot of Vegas shows where nipples get top billing.

Pin Up is one of the best of the sexy shows in Vegas right now, but the real star is not the gorgeous Claire Sinclair, or the four talented dancers who sizzle on stage in their skimpy outfits, but the six-piece live band that plays all the music. Where did the Strat find these musicians? 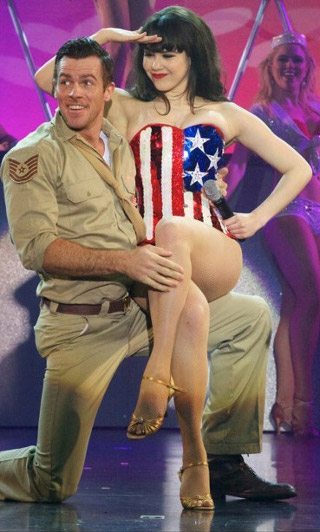 The band plays on stage throughout the production. The three horns are incredible. Halfway through the show, the band did a number on their own—no dancers, no singer, no acrobatics. They just started playing Thelonious Monk riffs on horns and guitar.

The show’s lead singer is Anne Martinez, whom you might recognize as the lead female singer from Bite, the Strat’s former topless show that moved to the Plaza downtown for a few months before finally closing for good. She has a powerful voice and I love the songs they chose for her. She does Ann-Margaret’s whimsical “Thirteen Men and Me,” Madonna’s “Sooner or Later,” Garbage’s “I’m Only Happy When It Rains,” and Christina Aguilera’s “Candyman.”

The sexiest number in the show, however, is the pole dancer, who spins and gyrates to Martinez’s soulful version of Alicia Keys’ “This Girl Is on Fire.” (Note to Strat Theater: Isn’t there any way to secure that pole at the top end—the way real poles are in strip clubs? It’s aesthetically jarring to watch that pole wobbling from the weight of the dancer, and it must bother the dancer as well. I suspect she can out-pole-dance just about any stripper in Vegas, but you’re not giving her a professional pole to perform on. Not fair!)

Another dancer, introduced only as “Sarah,” shows her skill at tap-dancing and gets into a percussion battle with the drummer. In my opinion, she wins the battle. I admit the drummer demonstrated rare talents. It was the first time I’d seen a drummer play while holding one stick with his hand and one with his foot. Still, she beat him, because even when he was drumming, I was looking more at her than at him. And when she was tapping, I forgot he even existed. (The fact that she’s a dead ringer for Scarlett Johansen may have had something to do with her allure.)

Some of the other songs you’ll hear in Pin Up are Screamin’ Jay Hawkins’ “I Put a Spell on You,” accompanied by Claire Sinclair stripping out of a witch’s costume, and, appropriately, Neil Sedaka’s old hit from the early 60s, “Calendar Girl.”

Go to see Pin Up just to see Claire Sinclair, the cutest, cuddliest, most adorable sex bomb since Betty Page. If I describe her outfits in print, I’ll come off like a major pervert (me?)—that’s how cute they are.

Whoever did the costume designs for the dancers should get some kind of award. I’m telling you guys, it’s not topless and it’s not bottomless, but you will experience serious pangs of lust throughout.

Anyway, there’s also a male dancer, Ryan Kelsey, who’s way over-the-top talented not only as a dancer, but as a comic actor, perfectly suited for the little dance dramas that occur throughout the show.

Technical details: The Stratosphere Theater has a proscenium stage with a runway. Seats are assigned. The best seats are in the second row where you can see the dancers close up when they’re on the runway. The front row is too close.

It’s one of the most comfortable showrooms in Vegas. All seating is either at tables or in booths, and it’s spacious. It seats about 300 in a space where a typical Vegas theater would cram in three times that many. There’s cocktail service throughout the show and it’s fast and efficient. A Bud is six bucks.

There are large video screens on either side of the stage that mostly display the live performers for those seated in the back. Don’t sit in the back.