A Risque Comedy Show with Burlesque, Magicians and Novelty Acts

This is a stand-up comedy show hosted in the showroom of a strip club, in which the comics are interspersed with pole dancers, burlesque dancers, magicians and sometimes other novelty acts.

The comedians are mostly at the border between open-mike and pro level and, since this is at a strip club, you can expect a lot of raunchy humor. Expect to see three or four comics, with the headliner who’s a true pro. As in the days of old burlesque, sometimes the comics do skits with the dancers. 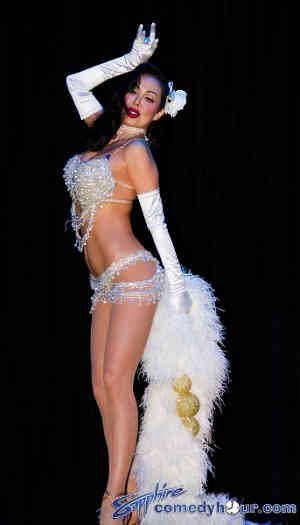 You don’t have to walk through the strip club portion of Sapphire to get to the showroom where the comedy show is located, and there are always plenty of couples and a few female groups in the audience.  The burlesque dancers and pole dancer never get topless.

The Sapphire showroom holds about 300 with comfortable table seating and drink service, though this off-Strip show tends to draw around 100. Because the room isn’t packed, the comedians feel free to wing it a lot and that’s a big part of what makes it so much fun.

Fifty years ago, when I used to go to burlesque shows in Detroit (yes, I’m that old), there were always baggy pants comics that performed between the striptease acts. The Sapphire Comedy Hour is reminiscent of those shows. The jokes were mostly raunchy and corny and often had the audience moaning as much as laughing, but there was a fun factor to watching comedians perform when they didn’t worry about a joke bombing because their responses to hecklers were something the audience enjoyed as much as the (often awful) jokes.

“DatDude” Donny Johnson has been hosting the show for some time now, and he’s the perfect host for a show like this. Donny likes to flap his jaw and will make any joke that pops into his head, no matter how dirty or downright depraved. He loves the back-and-forth banter with the audience. 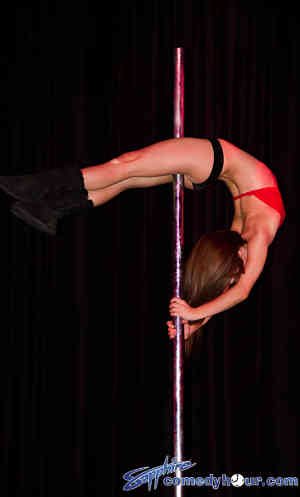 The burlesque dancers are also among the best working today. Hawaiian burlesque queen, Kalani Kokonuts (photo above), has been a regular feature for some time now. She does a classic old-style fan dance beautifully.

One magician I’ve seen more than once in this show is Mondre, whose act is similar to Lance Burton’s act in the 1980s, when Lance broke in at the old Follies Bergere at the Trop. Mondre doesn’t speak on stage but does beautiful illusions with cigarettes, scarves, and doves. Try to come when Mondre will be performing.

On my most recent visit, Mondre was replaced by Las Vegas comedian Greg Dow, performing (masked) as The Shocker, the world’s only magician who’s also a pro wrestler. The best joke of the night was The Shocker’s observation on the demise of Robin Williams. (Is it too soon?) What was most surprising to me was that so many in the audience got the joke.

Other comics on a recent Friday night were Alphonso Ochoa, Johnny Hollywood, and the headliner, Jozalyn Sharp, a first-rate pro. She was the funniest of the bunch, mostly with over-the-top raunchy jokes about what sex is like for fat girls. You can see Youtube vids of all of them performing in different venues.

Comparing this show to other Vegas comedy shows, it’s most similar to Sin City Comedy, a show at Planet Hollywood that also features burlesque dancers. The comics are not always as polished as at Brad Garrett’s Comedy Club at MGM Grand, a show that features top-of-the-line stand-up comics with an ever-changing roster (but no burlesque). On the other hand, at Sapphire, the comics take interesting risks, so you don’t feel like you’ve already heard all the jokes before as you do at the mainstream Strip comedy clubs.

The show starts pretty promptly at 8 pm, because it’s a 90-minute show and the Men of Sapphire come on at 9:30.  My wife and I each had a glass of the house wine at $14/glass, but you can cut the cost of drinks in half by taking the club limo to the show (see below) and purchasing the buy-1-get-1-free drink coupon.  You might also want to consider the club’s VIP drink packages.

Sapphire will provide their club limo to transport you to the club for a $15 reservations fee, but the fee will be waived if you purchase a buy-1-get-1-free drink coupon or bottle.  To reserve your ride, call 702.869.0003.

And after the show, check out the strip club. It’s couples friendly, and the dancers are gorgeous.