Long-time Vegas strip club regulars will notice that Sophia’s is in the venue that used to be Badda Bing, though it’s been totally remodeled since then.  It’s a two-level club that is less than a mile off the strip. The club is conveniently located across I-15 from the Cosmopolitan, Vdara and Aria. A low-cost cab ride across the new Harmon extension. Downstairs is the main room with the big central stage, two bars, and a VIP room.

Upstairs is another bar, another VIP room for the 30- and 60-minute dances, and seven 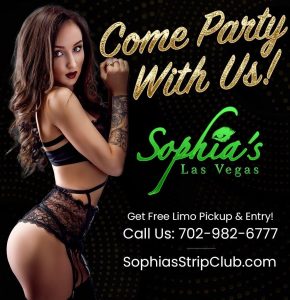 Among the Best VIP Parties in Vegas

private suites, for 60 minute dances. The VIP rooms are group VIPs. The ultra-premium private suites are plush and large enough for a few friends to be entertained by a few dancers. Sophia’s private rooms all have windows that overlook the main room downstairs, TV screens and curtains that can be closed.

The new main stage at Sophia’s Cabaret is low and surrounded by seats. (I mention this because Badda Bing had a main stage so high there were no seats on the rail.) If you like watching dancers close up and tipping them, this is an excellent stage.