Spearmint Rhino is Still One of the Plusher Clubs in Vegas 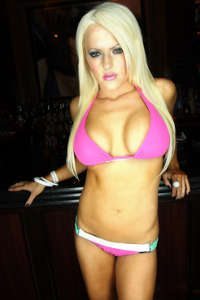 Spearmint Rhino has finished a major remodel that was driving away customers, as many of its dancers left for Sapphire and Treasures. Still, Spearmint Rhino remains one of the plusher clubs in Vegas and it’s now larger; it continues to eschew the typical high-tech look for something more opulent and flattering to skin tones. Think English country manor with lots of comfy seating, fake paintings (nudes, of course), muted lighting, and big ceramic vases in the passageways.

For many years, Rhino was the best gentlemen’s club in town, packed wall-to-wall with tens.  It used to be that a dancer had to be thin and movie-star pretty with big breasts to work here.  Now the club has a wider variety of dancer types.  The lap dance mileage standard here is less reliably high than in the past.

But the worst thing about Rhino in Las Vegas has always been its hustle factor. Out of the last four times I’ve visited Rhino to scout the club for TVO, I’ve been insulted or harangued by a dancer for not spending enough money (or, at least, not spending enough on her) three of the four times.  The last time, the colleague I was with had to pay the dancer off to get her to leave us alone while we finished a business discussion.

Maybe the dancers are stressed out.  But since this doesn’t happen at most other Vegas strip clubs, it seems to be some kind of management problem.

Rhino has one main and several smaller stages, but this is primarily a lap-dance club—the dancers don’t do much on those stages. The group VIP rooms are small spaces with multiple open booths.

There are separate group VIP rooms for the hour, half-hour, and three-song dances. The club’s true private rooms, which also have open doorways, are $900 for an hour (400 for the dancer, 500 for a bottle), or $100 more than Sapphire’s elegant Skyboxes, which have real doors you can close behind you. If you intend to spend time with a series of dancers in the private room, you only have to pay the 500 bottle fee once.

The admission fee at Rhino has been raised to $54, among the highest in town.

Spearmint Rhino serves food 24 hours a day (except for Sunday, the cook’s day off). The selection of breakfast, lunch, and dinner items includes steak and eggs for $10; most sandwiches, salads, etc. are in the $6–$10 range.  There has been a lunch special running from 11 am to 7 pm daily, featuring a burger or chicken club with fries and water, soda or any Bud product for $5 (switch a steak sandwich for the burger and the price is $7).

All beers and wells are $5 until 7 pm, then the evening price of a beer goes to $12 (unless they make you pay at the door for the two-drink minimum, in which case the drink vouchers cost $11 each).

Sapphire (club website) offers busty, long-legged beauties by the hundreds (400+ during peak evening hours). This elegant club is a babe bacchanal, with the wildest lap dance scene in town.

Treasures (club website) is the most luxurious of the high-mileage Vegas topless clubs, populated with stacked 9s and 10s who know how to pamper a man.