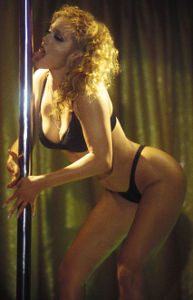 The Library Club, formerly Cheetahs, is best known for being the strip club where the cult movie Showgirls was filmed, including the famous scene where Elizabeth Berkley licked the stripper pole.  There’s a good reason the movie was filmed here.  Showgirls was released in 1995 and the early 1990s were Cheetahs’ glory days, when it was mob-owned, full of beautiful topless dames, and the best strip club in Vegas.

The Library is NO LONGER a totally nude, no alcohol club. They reverted to full bar/topless in September 2022. Patrons and dancers must be between ages 21+

New management took over in September 2019 and they’ve got professionals running the key functions.

The club has a big main stage and two smaller stages, all dimly lit, but you can sit on the rail and watch the dancers comfortably; the few flashing lights aren’t irritating. The stageside chairs are comfortable and allow you to be inches away from some beautiful “tacos.”

The Library charges $30 admission, even for locals and out-of-towners who drive themselves.

On a recent visit the girls were first class, and the dances were the highest mileage you could imagine.  (Ask for Jill!)

29 Responses to “The Library Club”

Leave a Reply to JM