[Note:  Tao Beach has returned to being a topless pool in 2019 after several years of requiring tops.  And that was after a couple of years of decline in their topless pool scene.  Even now, tops may be required on weekends.  But the pool’s free admission on Mondays through Wednesdays, including for locals, ought to revive the topless party scene here pretty quickly, once word gets around.  We will update our review soon.]

Okay, your mission—should you choose to accept it—is to gain entrance to the TAO Beach Pool. And believe me, that’s easier said than done. This pool suffers from being a bit too popular with the club set. If you’re not a Venetian hotel guest with a key, you have to go to the TAO Beach podium on the second floor of the Venetian, up the escalator by the Apothecary shop, where a host decides whether or not you make the grade. If so, he escorts you past the guard to the elevator you take to get to the pool.

So getting past this host is like getting into a popular nightclub where the doorman decides who gets to go in based on how hip they’re dressed. Sexy young babes always get in. Any guy who looks like a horndog showing up because he read this website will likely be turned away.

Getting Past the Tao Beach Dork Detectors 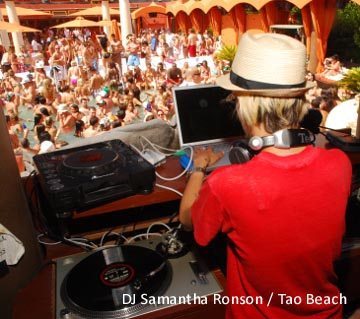 Here are a few tips on getting into this pool when you have no Venetian room key, you have no reservation, and you’re not on a guest list:

1) Go early. The more crowded the pool is, the more difficult it is to get in.

2) Don’t look like a dork. If you can’t help it because you are, in fact, a dork, at least look like a rich hip dork. Wear cool shades and beach clothes like you fully expect to get in. A tattoo and a few piercings might help. If you’re losing your hair, shave your head. Finally, shave your chest. Hip guys today are all walking around the pools with chest stubble. You’ve got to look like you belong.

3) Go with a girl. Un-escorted guys are turned away a lot quicker than men accompanied by women. Of course, if you had a woman, you probably wouldn’t be going to a topless pool.

4) Tip the podium host, with the amount of your tip based on the difficulty level of your getting in. If you’re young, good-looking, tattooed, pierced, and you’ve got chest stubble, five bucks might do the trick. If you’re hopelessly uncool, it might take a twenty. Note, however, that this tip only gets you onto the elevator to the fourth floor so you can enter the regular pool area. It doesn’t get you all the way to TAO Beach.

Once you get into the regular pool area, just follow the signs to TAO Beach, where you’ll find a line of people just like you who somehow managed to get this far and now must convince yet another dork detector that they’re cool enough to party with B-movie extras and rappers’ roadies. How do you get past this final obstacle? Follow the exact same four tips described above. Go early. Don’t be a dork. Go with a girl. And if all else fails, bribe your way in.

The pool is located on the roof of the TAO nightclub. On Monday through Wednesday afternoons, it’s open to the public with free admission, which makes it very popular. Admission fees are charged on weekends and evenings, when the pool party becomes an extension of the TAO nightclub. I don’t cover the TAO nightclub scene, because there are no topless girls there. All of my comments below apply to the pool, during daylight hours only.

TAO Beach on the Weekend

Let’s start with the weekend when you have to pay to get in. Officially, topless sunbathing is verboten, but rumor has it that sometimes a starter shows up and, if no one complains, the babes start doffing their tops. To see if there was any truth to the rumor, I went on a very crowded Sunday afternoon and spent almost four hours there. It was 104º and by three o’clock, all those margaritas and mojitos had the crowd loosened up to the point where they were dancing in the pool, on the decks, in and around the spa—100 hot babes in string bikinis and dudes with no body hair boogying like there was no tomorrow. But nary a nipple in sight (a female nipple, that is). No starters. I think that weekend cover tends to put off a lot of the strippers who know where the free topless pools are.

So the weekend party is hit or miss as far as the RNC. But TAO Beach still rocks. Even if the girls don’t shed their tops, I just want to be there at three o’clock in the afternoon when those mojitos kick in and all those babes start dancing. This is better than an Annette Funicello movie!

If you’re trying to pick up a girl and don’t succeed at this pool party, you’ve got some serious social problems. Due to that no-uncool-guys-without-a-girl admission policy, the girls outnumber the boys by a wide margin and they’re all getting plastered. I’m just glad I’m married and no longer have to go through all that hooking-up crap. (Sigh.)

But if you want guaranteed topless, go on a weekday and you don’t even have to pay to get in (assuming you can get past the dork detectors). I went on a hot Wednesday afternoon and found about 80 people, mostly young and good-looking. Lots of bikinis. A dozen girls were topless and eight of them were stripper grade.

Even better, TAO Beach understands titty ball like no other topless pool in town except Sapphire. They have a generous supply of about two dozen beach balls in the pool, and those balls start flying right away. The NIM factor is big here. The small shallow pool is perfectly designed to encourage this fast-growing sport. And be sure to check out the reclining Buddha overlooking the spa, where the girls like to go to take pictures of each other. I like sitting up by the bar and watching them pose.

The DJ plays mostly hip-hop and house music and cranks up the volume as the afternoon wears on. There’s shade in the bar area and under a few umbrella lounges, but it’s not easy to come by with the crowds that show up.

There’s a full bar. The grill menu has burgers, salads, and lots of satays. If you want a greater selection of food choices, you can go outside the TAO Beach area to the Venetian’s regular pool area, where you’ll find an outdoor restaurant called Riva, a Wolfgang Puck eatery. You can come and go from TAO Beach to the regular pool area, so long as you wear the wristband you get when you first enter.

Technically, TAO Beach is a singles club where young people in Vegas go to find someone to get laid. It’s a party atmosphere start to finish. But if all you’re going for is to ogle the girls, you won’t be disappointed.