From Stabile Productions, the producers of X Burlesque (review) and X Rocks (review), we now get X Country. 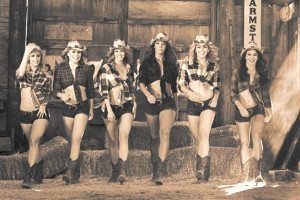 A Still from the X Country Girls’ Movie

I was a bit worried going in to see this show as I’m not a big fan of country music, and the music in the Stabiles’ other X shows (mostly rock) is a strong point. But about halfway through the show I started to realize I am a big fan of country music, at least when it’s combined with teasy dancing by topless leggy girls in the tiniest Daisy Dukes (think frayed denim thongs) that pass for legal in Vegas.

Most of these dance numbers are stripteases. The dancers get topless fast and often.

Some of my favorite numbers were:

The romantic/erotic striptease and shower in a tub, performed to Patsy Cline’s heartrending “Crazy.”

The striptease from a classic white bridal gown to The Band Perry’s “Better Dig Two.”

The three-girl ballet in g-strings to Lady Antebellums’ “Just a Kiss.”

The two topless dancers on the seesaw, performing to Gretchen Wilson’s “All Jacked Up.”

The classic burlesque striptease from gown and gloves to Sam Hunt’s “Take Your Time.”

The Trace Adkins’ segment that started with “Swing Batter Batter” (three dancers in almost-not-there baseball uniforms) and ended with a La Femme-inspired leg show (dancers on their backs, legs in the air) to Adkins’ rowdy “Honky Tonk Badonkadonk.”

The whimsical lesbian bed scene where the dancers in lingerie undress each other to Little Big Town’s “Girl Crush.” (If you have a weak heart, set your pacemaker on Red Alert for this number.)

The only break from the dancing was a short set by comedian Dennis Blair. He’s a master on acoustic guitar at mimicking popular musical styles. He does very funny impersonations, mostly of singers. His conversation between Bob Dylan, Ozzie Osborne, and Chewbacca is worth the price of admission to this show.

The six dancers are beautiful and talented and hard to take your eyes off.

This show is uncharacteristically dark on Friday and Saturday nights, but plays every Sunday through Thursday at 10:30 pm. Good show to sit close so the VIP seats are worth it if you love watching dancers close up.

One Response to “X Country – Review”