This show has recently moved from the Rio to Bally’s and has gone through quite a few changes since I saw it at Rio a couple years ago. Most notably, the intense hard rock score has been slightly mellowed down.

Bally’s Back Room is an intimate venue that seats about 150 (off the top of my head). There are no tables or cocktail service, so get a drink outside and bring it with you. It’s all flat-floor seating with five rows of chairs so all of the seats are pretty good.

Some of the new numbers (or at least new to me):

Five dancers in frilly pastel bikinis dancing to Get It On by T. Rex.

A girl on a hoop doing aerial tricks to Blood, Sweat and Tears’ Spinning Wheel.

Dancers slapping each other with Day-Glo body paint to Hendrix’s Purple Haze. 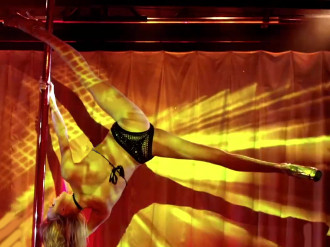 The pole dancer’s number, which used to be performed to Nickelback’s Shakin’ Hands is now being done to Bowie’s Fame. (Unfortunately, the pole is still too wobbly for the dancer to really show what she can do.)

Two girls are again playing in a tub (with shower!), but this time to Cinderella’s Nobody’s Fool.

There must be at least 40 different songs used in the production (maybe 50), some for only ten seconds, some for 30 seconds, none for the whole number. The energy level never really lets up. The last time I saw the show, there was a ten-minute break with a standup comic, but the comic is not in the new version of the show.

The whole show consisted of seven dancers, all of them athletic, mostly starting out in skimpy outfits and quickly getting topless, with an emphasis on acrobatic and gymnastic dancing, including dancing in bare feet and ballet slippers and even toe shoes in the topless ballet. If you can sit back and enjoy watching beautiful women dancing in g-strings, you’ll like this show despite any lack of theme other than rock’n’roll.

The musical emphasis is still on hard (especially metal) rock, with a few interesting diversions. Some of the songs I heard pieces of include Gangsta by Kehlani, Come Together by the Beatles, Alice Cooper’s Welcome to My Nightmare, Still of the Night by Whitesnake, Van Halen’s Ice Cream Man, Abba’s Dancing Queen (really!), Metallica’s Fuel, Aerosmith’s Lost Child and Jaded, AWOLNation’s Maybe I Should Kill Myself, Throne to the Wolves’ The Unholiest of Kings, Def Leopard’s Photograph, In the Moment’s Adrenalize Me, Something I Can Never Have by Nine Inch Nails, and Guns N’ Roses’ You Could Be Mine.

The dancers in all of the Stabile productions (X Burlesque at Flamingo and X Country at Harrah’s being their other Vegas shows). If you liked X Burlesque and X Country (and I liked both), you’ll probably like X Rocks. It’s the same basic formula—talented athletic dancers with knockout bodies performing to high-energy beats. The costumes aren’t elaborate because the main draw of these shows is the lack of costumes.