Like Sean of the Dead in G-strings and Heels —

So, the zombie is having an emotional crisis. He’s hungry for brains, but the other zombies have already eaten all of the brains. He’ll settle for any human flesh at this point, but the other zombies have also eaten the entire body of their latest victim … except for one appendage left lying on the ground. He picks it up, studies it, gets it oh-so-close to his mouth, ready to take a big bite, but stops himself. He sings a heartfelt song that zombies have probably been singing since time began, “Eating Penis Doesn’t Make You Gay.”

Unfortunately, I’m afraid eating that penis did make him gay. By the end of the show, he’d turned into a zombie drag queen, singing “I Feel Pretty (and witty and GAY!),” a song I haven’t heard onstage since Maria sang it in West Side Story 50 years ago. Stephen Sondheim (who’s 84 now) must be feeling proud that his masterpiece lives on and continues to change with the times.

As musical production shows go, this one’s in a class by itself. It is so inane from start to finish, yet somehow sticks to its zombie theme all the way to its unbelievably sacrilegious closing

which takes place in a cathedral, with a life-size video Jesus hanging on the cross behind the zombie dancers in their red satin choir robes and the big fat Mother Superior Zombie with blood dripping down her chin and her humungous (fake) breasts bared.

Needless to say, I love this show. The female dancers are gorgeous and talented and sexy as hell if you can get past their zombie makeup. When topless, they wear pasties, I guess because the producers wanted a minimum age requirement of only 16, knowing who the zombie fans in this world are.

The premise: As a result of the radiation from the nuclear bomb testing in the Nevada desert in the 1950s, many people died and came back as zombies with a hunger for humans, especially brains. For a while, they were hunted, but in recent years, they made their peace with normal society, and they now have their own club in Las Vegas, Club Z, which is where we in the audience happen to be sitting to watch their show. 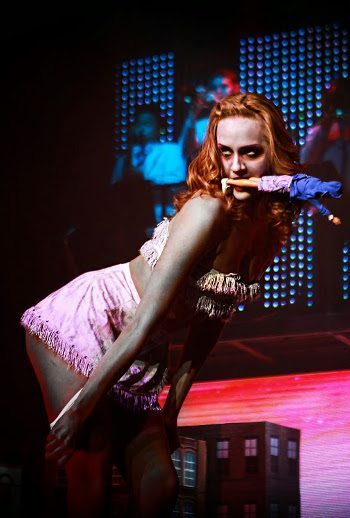 Then there’s The Blob number, the Zombies in Outer Space number and the Zombie Ballet. One of the highlights of the show is a performance by “Turf,” a double (triple?)-jointed dancer who truly does seem to be something other than human. If you watched America’s Got Talent in 2012 (I admit I did), you will remember Turf and you’ll be pleased to know that Turf–who was a street performer in San Francisco before bringing his street act to Vegas–has found a home in Zombie Burlesque.

One other important feature of this show is that the music is all produced by a seven-piece band, live and often onstage. The band cooks and the singing isn’t lip-synched. Sophia LaMort really has a voice.

The V Theater is small–seats about 200–in standard theater rows on the flat floor. The stage is raised so you can see all of the action even from the back, but I’d advise getting there early to grab a good seat. The first ten rows are the VIP section and will cost you twenty bucks more. I tried bribing the usher with a fiver, but she wouldn’t let me into the VIP section. There’s beverage service inside the theater before the show, or you can buy a drink at the bar outside the entrance and carry it in. A domestic beer cost me $6.

If you’re in Vegas with your teenage kids, or you just happen to like zombies, this is the show to see. It’s the funniest zombie show since the film Sean of the Dead.