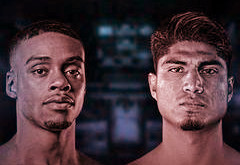 Spence vs Garcia — A Clash Between Two Perfect Records

Boxing fans are excited about the upcoming Spence vs Garcia IBF Welterweight Championship this Saturday night (March 16). The fight is being held at AT&T Stadium in Arlington, Texas, but Vegas should be crowded with fight fans who want to get money down on this match.

The oddsmakers pretty unanimously like Spence. He’s younger, taller, has a longer reach and he’s proven himself consistently at this weight class. But Garcia’s longer career and his 39-0 record will definitely be attracting a lot of money.

Crazy Horse 3 is the only Vegas strip club that will be screening the Spence/Garcia fight with a $50 package that includes free entry, free pizza, transportation, a $60 drink card, beer bucket specials and half price premium bottles. Topless, full bar, 21+