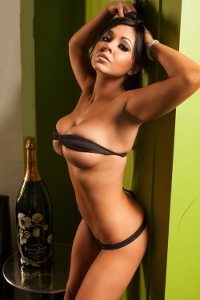 Las Vegas’ best strip clubs are on a late schedule compared to strip clubs in most other cities. Prime time in the Vegas clubs—when you’ll find the greatest number of lap dancers and generally the best stage shows—is from 11:00 pm to 3:00 am.

With fewer conventions due to the Covid Flu the club scene is even later than it was pre-Covid. That’s because the conventioneers would hit the clubs after 10pm. With fewer business travelers the demographic is younger, and more late night oriented. They tend to hit nightclubs to “pre-game” before hitting the strip clubs. At 1am they are still lining up to go to Treasures, Sapphire or Palomino!

There are benefits to arriving earlier, including deals on drinks and dances and a more relaxed atmosphere.  See below.  But if you show up at pretty much any Vegas strip club before 9 pm, don’t be surprised if the audience doesn’t fill the club and you see a smaller number of dancers than we told you to expect.  That’s because half the club’s dancers are still in the dressing room putting their make-up on.

Las Vegas comes alive in the wee hours, more so than any other city in the country.  First, the town is always full of visitors on vacation who are in the mood to party.  Second, Nevada is the only state in the U.S. that allows the on-premises sale and consumption of alcohol 24/7/365. There’s no “last call for alcohol” until the last customer leaves.

Nevada is also one of few jurisdictions in the world where public drunkenness is 100% legal.

In most cities, the bulk of the work force gets off between 3:00 pm and 6:00 pm, a time when the local bars see a slew of customers coming in to unwind with a drink or two.  But in Vegas a huge chunk of the work force is employed on swing shift in casinos or restaurants.

The Vegas swing shift ends between midnight and 3:00 am. So, that’s when the night clubs and bars (including strip clubs) really come alive.

Vegas strip clubs that have special events like feature dancers often advertise these events as starting at 10-11 pm, but don’t be surprised if the event doesn’t actually get going until after midnight.

So, if you’re looking for the biggest crowds, best stage shows and greatest selection of top-end dancers in the Vegas strip clubs, come at 10-11 pm and stay late.

But, late night isn’t the best time strategy for everyone.

The Benefits of Coming Early to the Vegas Strip Clubs 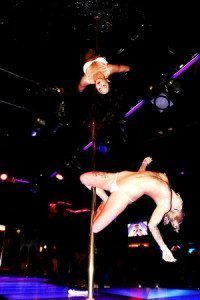 I am usually one of the customers you will find at 9 pm—or even earlier—in my favorite Vegas strip clubs. Here’s why.

Less Competition for the Best Dancers

Showing up before the big crowds arrive puts you in an excellent position for getting the best available lap dancers in the club. What good is it to spot that dancer across the room who is exactly your type, if there’s virtually no chance she’ll make it to your table before she’s snapped up by someone else?

Relaxed Dancers who have Time to Flirt

And dancers who come to work earlier usually pay a lower stage fee to the club.  That means they don’t have to sell so hard to get in the black for the evening—they can relax and flirt a while.

Earlier in the evening, the dancers are fresh and charming and natural.  Their feet aren’t hurting yet from the shoes.  They haven’t been turned down a dozen times for lap dances yet, or had rude customers insult their looks.

The lower-stage-fee enticement also tends to eliminate the first-string/second-string effect in Vegas.  Dancers who start early tend to stay on into the peak hours, and dancers who start late tend to stay on until the early morning hours.  Both sets of dancers are peak-hour worthy.  They just have different starting-time and stage-fee preferences.

In addition, you will often find exceptional drink and private dance deals in the afternoon and early evening, plus other amenities like free admission and free or discounted food.  For example, Hustler (club review) offers an open bar (domestics and wells) from 9am to 9 pm on Thursdays called Booze and Boobs.  What’s the catch?  There isn’t one.  Pay the cover and you’re in. They’re trying to get guys to come earlier to the club.

Summer is a slow season for the strip clubs. Until the conventions come back daytimes will be very sparse.

I just had a question from a TVO reader about daytime in the strip clubs. Here the advice I gave him ….

There are four clubs with daytime hours now, Hustler, Peppermint Hippo, Crazy Horse III and Play It Again Sam’s. The first 3 are cavernous and slow during the day. You’ll get to know the bartenders very well because you might be the only customer. You’ll get the urge to help the beer delivery guy or do inventory to feel useful.

As for number of dancers on hand… good luck, there might not be any. Or worse, the manager might call one at home and say to her, “get your ass over here now, there’s a customer waiting!” Do you want to that guy with that pressure on your shoulders?

My advice is this if you want to take in an afternoon strip show …. go to Play It Again Sam’s at Spring Mountain and Wynn.

The Weekend Starts on Friday Afternoon

Things in the summer are better on Fridays. Sapphire Pool and Day Club opens at noon, and that’s a great time. Also, Spearmint Rhino opens at 2pm for a Happy Hour on Fridays. 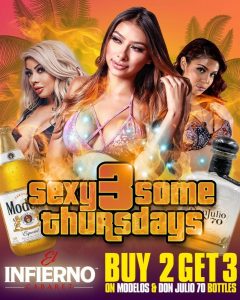 8 Responses to “What’s the Best Time to Go to a Vegas Strip Club?”