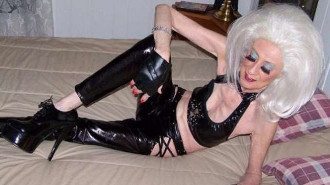 Are you ready for 86-year-old Lizzie Oliver, a retired high school cafeteria cook in Tuscaloosa, Alabama, who is now the world’s oldest stripper?

Lizzie allegedly started taking pole dancing classes at her senior center, discovered she was pretty damn good at it, and decided to make a career of it. She’s now touring the country and getting offers from adult film companies to make pornos–which she says she is seriously considering.

Lizzie is quoted on Freestyls.com:

“I feel more beautiful than ever. I was married for 54 years, had 7 kids, I’m even 24 times a grandmother. But now, I regained my body and my life after I got these buttocks shots. My sex drive is stronger than ever and I’m living in the present moment, it’s awesome. I’m on tour across the country, I dance in many clubs, meet tons of new people… I feel like a star!”

Starr and Storm certainly knew how to get the crowd riled up.  They still had their moves.  So don’t write Lizzie off.

The only thing that makes me wonder about the legitimacy of this story is that when I google Lizzie Oliver’s name, I find dozens of websites that feature this same story, but I don’t find any strip clubs advertising her. If she’s touring the country, where is she?

Anyway, if the story’s a hoax, it’s pretty funny. If it’s not, someone tell me where to find Lizzie Oliver. Tell her Vegas is calling.